Jewell Wicker reports that Georgia is taking center stage in the American political theater, closing out a year that began with Iowans basking in their familiar role as the focus of intense media saturation and front porch candidate campaign pitches. Georgia doesn’t typically dominate the national political spotlight, since the GOP has a long statewide win streak that makes results predictable and the timing of its elections tend to water down the stakes in the grand scheme. 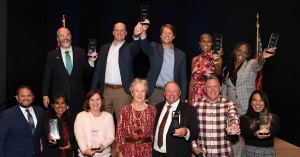 Mary Ann DeMuth reports that at the Gwinnett Chamber’s recent Small Business Awards program, 11 recipients were honored for their best business practices and entrepreneurial spirit. According to President and CEO Nick Masino, more than 90% of the Gwinnett Chamber’s 2,200 members have 50 or fewer employees, making small businesses the engines of the county’s economy.

Kelly Yamanouchi reports that Craig Arnold works as a sales executive for UPS, based in Sandy Springs. But, a couple of years ago, he found himself in the Caribbean, helping to organize food distribution after Hurricane Irma barreled through the Virgin Islands.

Jeff Gill reports that a public hearing is set for Dec. 17 on a proposed rezoning for an 848,200-square-foot office/headquarters and distribution warehouse on Falcon Parkway/Ga. 13 near Interstate 985’s Exit 14. Few details are known about the project in Flowery Branch, particularly the company behind the nearly 800-acre development.

Jonathan Ringel reports that the Supreme Court of Georgia announced Friday that former Chief Justice George Carley died from COVID-19 Thursday night. He was 82. Carley served on the Court of Appeals of Georgia from 1979 until 1993, and then served on the high court from 1993 until he retired at the end of 2012.

Jason Bateman reports, with a COVID-19 vaccine in sight, plans are underway on how it will be distributed across the state. Gov. Brian Kemp announced that he will hold a roundtable discussion on Monday with nursing home administrators to talk about the “distribution in the coming weeks.”

David Pendered reports that metro Atlanta, homeowners and renters are living in two completely different financial realities. The coronoavirus pandemic has only widened the divide, according to the latest edition of Harvard University’s annual report, The State of the Nation’s Housing.

Trump on Kemp: ‘I’m ashamed that I endorsed him’

Sarah Rose and Ga. Today Staff report that President Donald Trump on Sunday took aim at Gov. Brian Kemp, blasting Georgia’s governor for “doing absolutely nothing” to help him in the presidential recount and saying, “I’m ashamed that I endorsed him.” Trump made the comments to Fox News in his first live interview in weeks.

Greg Bluestein reports that at a gun range in North Georgia, Republicans roared in applause Saturday as once-bitter rivals Doug Collins and Kelly Loeffler shook hands and then embraced over their shared determination to keep the U.S. Senate in GOP control in Jan. 5 runoffs.