Staff reports that Governor Brian P. Kemp announced on Friday Georgia’s third year of partnership with the SANS Institute along with the National Cyber Scholarship Foundation to launch CyberStart America. CyberStart America builds on the previous Girls Go CyberStart and Cyber FastTrack programs and is now open to all high school aged students. 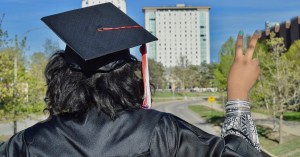 Mary Ann DeMuth reports that a new study from University of Georgia’s Selig Center for Economic Growth shows the lifetime earnings of each new four-year college graduate will increase the state’s gross domestic product (GDP) substantially. Specifically, the research calculated an additional economic benefit to the Georgia economy of nearly $2 million per individual who earns a bachelor’s degree and works an average of 40 years.

Kelly Yamanouchi reports that Delta Air Lines and Canadian carrier WestJet have withdrawn their application for antitrust immunity for a joint venture between the two carriers on flights between the U.S. and Canada.

Parker College of Business students paint for a purpose

Staff reports that the Humane Society of Statesboro and Bulloch County (HSSBC) has a fresh coat of paint for its new adoption center thanks to a group of Parker College of Business students who spent the weekend rolling up their sleeves to help the community organization.

Staff reports, at a small ceremony on Thursday, leadership from SK Innovation donated $60,000 to the Empower College and Career Center (EmpowerC3), a charter high school in Jackson County scheduled to begin operations in 2021. Jackson County will match this funding through its Education Matching Grant and donate an additional $60,000 to Commerce City Schools (CCS), where the large-scale battery facility is currently under construction.

David Pendered reports that BBC has begun airing a video about Georgia Tech’s Kendeda Building in a series about buildings around the globe that advance concepts of sustainability and equity. The exposure places the Kendeda Building squarely in a rarefied arena of buildings that help address some of humankind’s great problems.

Trevor Williams reports that Silicon Ranch, whose largest shareholder is international energy giant Royal Dutch Shell plc, is to invest $55 million set up its latest solar farm in Houston County. The 68-megawatt project will create 300 jobs during the construction phase and will power 11,000 homes when fully operational.

Dave Williams reports that telecom companies are ready and willing to invest tens of millions of dollar extending broadband service into rural Georgia, telecom executives told members of the Georgia Public Service Commission (PSC) this week. But they can’t afford to do so unless the PSC rolls back the fees the state’s electric membership cooperatives (EMCs) charge for attaching broadband technology to utility poles, the executives testified during a four-day hearing that wrapped up Friday.

Nyamekye Daniel reports that Georgia Gov. Brian Kemp called on Secretary of State Brad Raffensperger on Friday to complete a sample audit of the signatures on the absentee ballots cast in the general election. Kemp’s recommendation came two days after the state completed a full hand recount and audit of the election results in the presidential election.

David Wickert reports that Georgia is preparing to tally about 5 million votes in the presidential election for a third time as the FBI and GBI investigate threats against some state election officials. On Saturday, President Donald Trump’s campaign filed a petition for the recount, which he is entitled to do under Georgia law because Joe Biden’s margin of victory is less than half a percent.