Port of Savannah may be renamed after Johnny Isakson

Dave Williams reports that Georgia lawmakers will take up a resolution this winter to rename the Port of Savannah after retired U.S. Sen. Johnny Isakson, David Ralston, speaker of the state House of Representatives, announced Friday. Ralston, R-Blue Ridge, cited Isakson’s long record of support for Georgia’s deep-water ports and the role they play in the state’s economy. 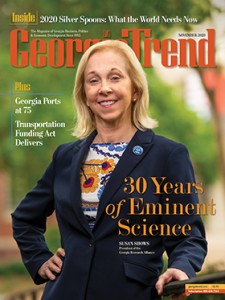 Up for the Challenge

Susan Percy reports that the harsh reality of the COVID-19 crisis that hit last winter may have taken a lot of people by surprise, when something they knew only as an obscure virus in a distant part of the world changed their lives practically overnight. But Georgia’s scientific community was prepared and eager to join the fight against the pandemic that has killed or sickened millions worldwide and thousands in the state.

Kelly Yamanouchi reports that Delta Air Lines Chief Financial Officer Paul Jacobson for a second time announced his departure from the airline, this time to become CFO at General Motors. Jacobson, Delta’s CFO since 2012, said in February that he planned to retire from the company at the age of 48 but would stay on several months while a successor was chosen and transitioned into his job.

Laura Corley reports that a textile mill in southeast Georgia with a record of repeatedly violating its state operating permit by dumping nitrates and other pollutants in the Ogeechee River is asking the state to relax its operating procedures for wastewater. The mill’s owner, Milliken & Company, has paid Georgia more than $83,000 in fines over the past three years as a result of violating standards set by the Federal Clean Water Act, according to records from the U.S. Environmental Protection Agency.

Josh Paine reports that Charleston and Church won the grand prize in the University of Georgia’s 2020 Flavor of Georgia Food Product Contest for its savory Cheddar Rounds snacks. Warren and Jen Simmons, owners of the Atlanta company, developed the product in 2016 from a handwritten recipe by his grandmother, who was an avid hostess of friends and family at her home in Charleston, South Carolina.

Leader of Georgia’s Japan Office to Retire After 30 Years

Trevor Williams reports, it wasn’t long after studying American literature and English language in college that Yumiko Nakazono set about putting her cultural understanding into action. Herself a “southerner,” hailing from Georgia’s sister prefecture of Kagoshima on the southern tip of the island of Kyushu, Ms. Nakazono joined the state’s Tokyo office in 1989 after a stint in the private sector.

Inspire Brands buying Dunkin’ for $11.3B

Ben Young reports, another baton has been passed, this time to new Georgia Power chair, president and CEO Chris Womack, from current leader Paul Bowers, who announced his retirement Friday. Womack will serve as president effective Nov. 1, and assume the additional roles upon Bowers’ full retirement in April.

Beau Evans reports that Gov. Brian Kemp is quarantining after being exposed to a person who tested positive for COVID-19, his office announced Friday afternoon. Kemp’s office soon afterward announced he and First Lady Marty Kemp tested negative for the highly contagious virus. Both are still quarantining.

Stephen Fowler reports that just over 50% of Georgia’s 7.6 million registered voters have already cast their ballots, nearly eclipsing the total votes in the 2016 presidential election and potentially contributing to shorter Election Day lines in crowded polls across the state.

Jill Nolin reports that Joyce Barlow lost her bid to unseat a longtime south Georgia state representative two years ago, but she says she never really ended her campaign. After the last votes were counted and the Democratic challenger had come up about 1,400 votes short, about 7 percentage points separated her and the 37-year incumbent, Republican state Rep. Gerald Greene.

‘They had to come out of the closet:’ Women and seniors in Georgia rally behind Biden

Jacqueline Alemany reports, in 2020, they have become a political force to be reckoned with on the local, state and national level as they push to elect Georgia Democrats like Sara Tindall Ghazal for the local House seat; Jon Ossoff and Raphael Warnock for the state’s two U.S. Senate seats; and Joe Biden for president. Their activism has Trump wondering why suburban women, a growing number of whom are not White, don’t seem to like him much anymore.

In U.S. Senate Race, Georgia Republicans Are Divided. Can They Reunite In A Presumed Runoff?

Emma Hurt reports, in the special election for the Senate seat held by Republican Kelly Loeffler, most Georgia Republicans are making a choice between the incumbent, who was appointed by Gov. Brian Kemp and her main GOP challenger, Northeast Georgia Congressman Doug Collins. Both have touted their pro-Donald Trump, anti-abortion and pro-gun rights stances.

Georgia Republicans bet it all on Election Day turnout

Elena Schneider reports that Donald Trump won Georgia by 5 percentage points in 2016. On Tuesday, he’ll be lucky if he squeaks by with a half-point victory. Public and private polling has Trump and Joe Biden locked in a margin-of-error race, dangling the prospect that Democrats might turn the state blue for the first time since 1992.

Staff reports that former President Barack Obama will visit Atlanta on Monday in a final effort to rally supporters for former Vice President Joe Biden and get them to the polls. Obama’s visit is being combined with the Georgia Democrats “Flip Georgia Blue” car rally for Senate candidates Jon Ossoff and Rev. Raphael Warnock.