Georgia Lawmakers To Hear Feedback On Casinos At Meeting In Columbus

Emil Moffat reports that casino gambling could provide an economic boost for the state of Georgia. On Wednesday, residents of Columbus are expected to hear from a committee of state lawmakers who are exploring legalizing that industry in the state as a way of bolstering the state’s economic position. The lawmakers want to hear what residents think, too. 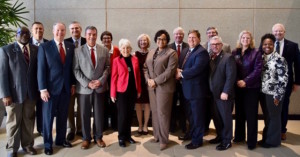 Kelly Yamanouchi reports that Hartsfield-Jackson International is seeking developers for land around the airport. The airport has issued requests for proposals for sites on Godby Road, Riverdale Road, Loop Road and Clark Howell Highway.

Katie Nussbaum reports that November proved to be another record month at the The Port of Savannah with 363,000 twenty-foot equivalent container units moved during the month, which was a 5.4% increase over the same month last year, or an additional 18,460 TEUs. For the fiscal year to date, July to November, the Georgia Ports Authority has handled nearly 2 million TEUs, an increase of 109,000 TEUs, or 5.8%.

Staff reports that residents in northwest Georgia can now receive world-class neurology and stroke diagnosis closer to home through a new telemedicine partnership between Floyd Medical Center and Erlanger Health System. “We are pleased to work with Erlanger Health System to offer our patients tele-neurology care,” said Kurt Stuenkel, President and CEO of Floyd Medical Center.

Business expansion to create 155 new jobs in Columbus. Here’s what you need to know

Allie Dean reports that First Credit Services, which manages call center operations for other businesses, announced Tuesday it will be expanding its Columbus location by adding 155 jobs and investing $2 million by purchasing and renovating a new building. The announcement was made at the board meeting of the Greater Columbus Georgia Chamber of Commerce.

Homma Rafi reports that researchers at Georgia State University’s School of Public Health have received a $2.65 million federal grant to coordinate a regional partnership with universities and state agencies to help parents with addiction issues improve their lives and the lives of their children. Parents with addiction issues often create environments that produce adverse child experiences such as violence and neglect.

Sean Keenan reports that at  long last, Atlanta’s housing authority is getting back into the construction game. It’s been roughly a decade since Atlanta Housing built any new affordable residences, but a report outlining the agency’s development plans obtained by SaportaReport suggests some $46 million in new construction is underway or planned for the 2020 fiscal year (from July 2019 to July 2020).

Stanley Dunlap reports that the Trump administration is pursuing a series of policies that could knock 54,000 Georgians off food stamp benefits and send them to Georgia’s community food banks for relief. The administration last week finalized one of three controversial policies that aim to limit nationwide eligibility for Supplemental Nutrition Assistance Program (SNAP) benefits, commonly called food stamps.

Wes Wolfe reports that business leaders in a number of Georgia industries in the last several years held to a common refrain — there are good jobs to be found, but not enough qualified people to fill them. State Senate study committees addressing that and the legal costs of doing business in Georgia wrapped up Tuesday and adopted reports that are to go for consideration to the General Assembly in January.

Judge: Kemp Must Answer Questions About Time As Secretary Of State

Stephen Fowler reports that a federal judge says Gov. Brian Kemp must answer some questions about his time as Georgia’s top elections official as part of a wide-ranging lawsuit challenging how elections are administered. U.S. District Court Judge Steve Jones ruled last week that the governor will need to answer two hours’ worth of questions about comments he made about increasing minority voter turnout and his actions as chair of the State Election Board.

The Jolt: Behind Robert Benham’s decision to leave the state Supreme Court

Jim Galloway, Greg Bluestein and Tia Mitchell report, plenty of head-scratching has been prompted by Georgia Supreme Court Justice Robert Benham’s sudden decision to step down on March 1, rather than retire when his six-year term expired at the end of 2020. Part of the mystery, as we understand it, is that the justice has had no direct conversations with Gov. Brian Kemp, who will now appoint his replacement.