Mary Landers reports that the second Georgia Climate Conference was held Thursday and Friday at the Emory Conference Center in Atlanta, and one of the first panels addressed what it will take to get to a carbon neutral Georgia. Panelists provided an overview of the Georgia Drawdown Project, a developing plan to reduce emissions in major sectors, including electricity, transportation and buildings.

Anna Bentley reports that Labor Day weekend was a bit of a blur for Dr. Jorge Cortes. As the rest of the country celebrated the end of summer, he and his family trekked more than 900 miles for a new beginning, driving 14 hours from Houston to Augusta. The renowned leukemia researcher left his position as deputy chair of the Department of Leukemia at University of Texas MD Anderson Cancer Center to become the director of Augusta University’s Georgia Cancer Center.

Matt Kempner reports that battered Georgia farmers are a step closer to getting a fresh infusion of disaster aid, more than a year after Hurricane Michael pummeled the state. But when they’ll actually get the money remains unclear. U.S. Agriculture Secretary Sonny Perdue’s office on Friday announced the approval of $800 million to producers in Georgia, Alabama and Florida who were affected by hurricanes Michael and Florence.

SunTrust selling 30 branches as part of Truist merger, none in Atlanta

David Allison reports that SunTrust Banks Inc. said Friday it will sell 30 branches as part of its upcoming merger with BB&T Corp. to form Truist. The branches will be sold to Memphis, Tenn.-based First Horizon National Corp. (NYSE: FHN) to satisfy federal regulations.

K.T. McKee reports that it was another whirlwind week for Rome International Film Festival Executive Director Seth Ingram as the 16th annual event came to a close Sunday with hopes of an even brighter future for Rome’s film tourism industry. The five-day event also included several workshops, an invitation-only roundtable discussion and a Student Academy.

Staff reports, who says something as seemingly innocuous as a car tag can’t make a difference? Horizons Community Solutions officials will certainly argue that point. The organization learned last week that it would receive $50,000 for its Breast Cancer Outreach and Education program, thanks to Georgia residents who purchased Breast Cancer license plates. 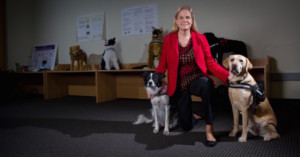 Mary Ann DeMuth reports, as dog owners, we converse with our canine friends all the time. But what if they could communicate with us in our own language? Melody Jackson, director of the Georgia Tech Animal-Computer Interaction Lab, has been working for the past few years on technology that gives dogs a human voice.

Trevor Williams reports that Atlanta’s Indian Consulate General set down roots in 2012 and has since firmly entrenched itself in the city’s diplomatic community and political sphere. Local officials from Sandy Springs Mayor Rusty Paul to (more recently) Fulton County Commission Chairman Robb Pitts have made trips to the country, nods to both India’s economic potential and the political imperatives implied by its large voting bloc in the north metro area.

Brenda Goodman reports that the Environmental Protection Agency has proposed its first of two new rules to curb emissions of cancer-causing ethylene oxide. Environmental advocates and legislators, however, say the federal agency’s plans won’t do enough to protect people who are exposed to the gas because they live near factories that make it.

Geoff Hing reports that Georgia election officials were poised to wrongly remove hundreds of people from the state’s voter rolls — until journalists with APM Reports unearthed the error. Last week, the Georgia Secretary of State’s office released a list of more than 313,000 infrequent voters — about 4 percent of all the state’s registered voters — who will have their registrations canceled unless they respond to notices that are about to be mailed or otherwise confirm their registration.

Jill Nolin reports that President Donald Trump kicked off a push to win over black voters in Atlanta Friday, building on a campaign appeal he first uttered three years ago: What do you have to lose? “You don’t have to choose to leave the Democratic Party, because the Democratic Party already left you a long time ago,” Trump said to a racially mixed crowd Friday that packed into a small ballroom at the Georgia World Congress Center.

Jim Galloway writes, two gauntlets were thrown down this week – one here, another in Kentucky. Together, they tell us that health care will be the Georgia hill that both Republicans and Democrats are willing to die on in 2020.