Doug Walker reports that Ball Packaging revealed plans for another expansion of its Floyd County plant Wednesday afternoon. The company plans to invest $217.8 million in a free-standing 250,000-square-foot addition to the compound at Ball Drive just off Ga. 53 and West Hermitage Road. 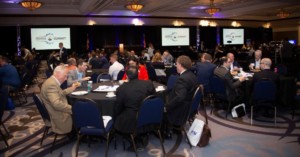 Mary Ann DeMuth reports that last week more than 800 manufacturing industry professionals gathered in Atlanta for the fifth annual Georgia Manufacturing Summit, a trade show presented by the Georgia Manufacturing Alliance (GMA). Like past summits, participants discussed issues important to the industry in our state and shared insights for achieving success.

Maya T. Prabhu reports that a coalition of arts and entertainment venues urged Georgia lawmakers against allowing future gambling facilities from including performance spaces, saying it would undermine their business. Allan Vella, the president and CEO of the Fox Theatre, said while the coalition didn’t oppose expanding gambling in Georgia, he worried that allowing potential casinos to include entertainment space could force arts and culture venues across the state out of business.

Peachtree City-based Cooper Lighting to be acquired by Dutch company Signify for $1.4B

Jessica Saunders reports that Dutch lighting company Signify N.V. (Euronext:LIGHT) says it has reached a definitive agreement with parent Eaton Corp. (NYSE: ETN) to acquire Peachtree City-based Cooper Lighting Solutions in a cash deal estimated to be worth $1.4 billion. The deal is subject to regulatory approvals and other customary conditions.

Katie Nussbaum reports that Gulfstream Aerospace Corp. has cut 446 positions from its domestic workforce, which includes operations in Savannah, Brunswick, Appleton, Wisconsin; Long Beach and Lincoln, California; Palm Beach, Florida; Las Vegas, Nevada; Dallas, Texas; Cahokia, Illinois; and Westfield, Massachusetts. The exact number of workers affected by cuts in Savannah was not available, but Heidi Fedak, director of corporate communications and media relations, said the cuts were about 3.5% of the domestic workforce.

Clint Thompson reports that peanut harvest season in Sylvester is more than just farmers digging up the fruits of their labor. It’s a time of celebration for agriculture, the sector that drives the economic footprint in this rural community. Sylvester is just one Georgia town that exudes peanut pride. Plains and Brooklet also host peanut festivals in the fall, and Blakely hosts the Peanut Proud Festival in the spring.

Susan Percy reports than an era is ending: Georgia’s senior U.S. senator, Republican Johnny Isakson, is leaving his Senate seat at the end of the year due to ill health. Isakson, 74, is the only individual to serve Georgia in the state House, state Senate, U.S. House and U.S. Senate.

Atlanta Motor Speedway among those pitching gambling to lawmakers

Beau Evans reports that casino promoters and Georgia business boosters pushing the state to expand legalized gambling — including the Atlanta Motor Speedway president — lined up in a meeting room across from the Capitol Tuesday to sell state lawmakers on plans to allow new games of chance inside state borders. The Hampton venue that’s hosted NASCAR races and other events since 1960 makes for “a natural location” to build a new entertainment complex that includes casino gaming, said Ed Clark, Atlanta Motor Speedway president.

Kim Jarrett reports that members of a study committee said they are not looking to put the brakes on e-scooters but want regulations so that they can co-exist in Georgia’s cities. The Senate Study Committee on Evaluating E-scooter and Other Innovative Mobility Options for Georgians heard from representatives from Georgia cities about the challenges faced by the two-wheeled motorized vehicles.

Georgia Republicans fracture over rebuke of Trump for abandoning Kurds

Jim Galloway reports that in an overwhelming vote that fractured Republicans, the U.S. House on Wednesday afternoon passed a bipartisan resolution that rebuked President Donald Trump for his withdrawal of U.S. forces from Syria, a decision that cleared the path for Turkey to invade territory controlled by Kurds that were allied with the U.S. against the Islamic State.