Roxanne Scott reports that Atlanta and Clarkston have joined more than 100 local governments across the country to oppose the end of DACA. The two cities joined an amicus brief, filed this month, that praises the benefits of DACA and said the ending of the policy is unlawful. 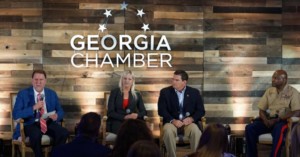 ARC: Metro Atlanta will be more diverse, older by 2050. Are we ready?

Ben Brasch reports that by 2050, metro Atlanta will face enormous challenges as 2.9 million more people flock to an area already called home by twice that many residents. A population forecast released Thursday by the Atlanta Regional Commission predicts the 21-county area will, in the next 30 years, grow older and more diverse as it basically absorbs the population of metro Denver.

Dave Williams reports that a regional agency that the General Assembly created last year is about to take the first step toward fulfilling its mission of pulling together the mishmash of transit systems operating across metro Atlanta. By the end of this year, The ATL — short for Atlanta-Region Transit Link Authority — is expected to adopt its first regional transit plan, a prioritized list of bus and rail projects submitted last summer by local governments and transit agencies from 13 counties.

Curt Yeomans reports, the fact that Gwinnett County is a majority minority county is likely no secret as county leaders have long touted Gwinnett’s diversity as an asset, but the county is expected to get a lot more diverse over the next 31 years. The Atlanta Regional Commission released its 2050 population projections for metro Atlanta on Thursday, and they show a big change is coming Gwinnett in terms of the makeup of its population.

Two Columbus law enforcement agencies could merge in 2020. What would that mean for city?

Allie Dean reports that a controversial issue affecting two local law enforcement agencies may come to a head next year after a city board recommended merging the Muscogee County Marshal and the Muscogee County Sheriff offices. The Public Safety Advisory Commission, a group of citizens appointed by council members and led by Chairman Tyson Begly, was asked earlier this year to evaluate the impact of consolidation on public safety.

Andy Miller reports that state officials are expected to have at least one health care waiver proposal ready for an agency board to consider in early November. The waiver development is a central part of Gov. Brian Kemp’s strategy to improve Georgia health care. The state has a high uninsured rate, and its health rankings on various measures lag behind most other states.

GDOT adds two years to I-285 projects, cuts time for truck project on I-75 South to Macon

David Pendered reports that the state’s new highway construction schedule in metro Atlanta adds two years to the overall completion date – now early 2032. It extends the timeline for toll lanes on westside and eastside I-285 by two to four years, and cuts the schedule by more than a year on a stretch of I-75 south to Macon that’s often ridden by tractor-trailer traffic.

Larry Hobbs reports that as salvage operations progress on the shipwrecked Golden Ray in the St. Simons Sound, the overturned freighter’s oily imprint continues to expand within local inland marshes, according to local environmental advocates. Crews have removed most of the 300,000 gallons of fuel that was onboard when the 656-foot ship foundered, overturning on its port side in the dark hours of Sept. 8 between St. Simons and Jekyll islands while heading out from the Port of Brunswick with a cargo of 4,200 vehicles.

Jill Nolin reports that other people may be praying for rain after a string of miserably dry weeks in Georgia, but for Ryan Austin, the clear skies have given him a reprieve from the rainwater that has been relentlessly trickling into his bedroom for the last year. To Austin, it seemed as though the rain always fell at night, just as the 27-year-old Seminole County native tried to sleep under his blue tarp-covered roof.

Tamar Hallerman reports that last year, Democrat Dana Barrett received the big break she’d long been hustling for when she began hosting her own political talk radio show. But chatting with listeners who largely shared her views started to feel like an echo chamber. That and a recent move to Buckhead prompted Barrett to leave her show on 640/WGST-AM and challenge Republican Barry Loudermilk for his 11th District congressional seat.