Staff reports that Former President Jimmy Carter suffered a fall at his home in Plains Sunday, but it didn’t keep him from attending the kick-off to a Habitat for Humanity project Sunday night in Nashville. He hit his head and required stitches, officials said. 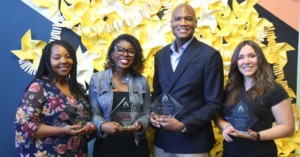 Mary Ann DeMuth reports that Atlanta Emerging Markets Inc.(AEMI), created by Invest Atlanta; the Spanx by Sara Blakely Foundation; and the Center for Civic Innovation (CCI) have teamed up to award $200,000 in zero-interest loans to four Atlanta entrepreneurs. These individuals are in the early stages of growing their businesses and will use the money to expand their community impact.

J. Scott Trubey reports, for four years, movie mogul Tyler Perry has taken on a role that few people outside the gates of his sprawling Fort McPherson studio have seen. He’s still the prolific actor, writer, director and producer of films and television series such as the “Madea” franchise and “The Haves and the Have Nots.”

Here are new technologies being patented by Coca-Cola, NCR, UPS and other big Georgia companies

Join Dr. Gregory B. Levett, Sr. and other thought leaders for an intimate conversation. Learn how to master the art of entrepreneurship, team building and business strategies to create your own success and wealth.

Katie Nussbaum reports that being the Hostess City of the South, Savannah is often thought of for its thriving hospitality industry, but in the past year one group has ramped up efforts to bring the focus to logistics and technology through the Savannah Logistics Technology Corridor. “This is actually a a concerted effort to build a full eco-system here: startups, mid-tiers, mature companies, all the way through,” SLTC Task Force Chairman Keith Fletcher said of the corridor, which includes areas such as the Port of Savannah, Savannah Technical College, Georgia Southern University Armstrong Campus and the Savannah Advanced Manufacturing Center.

Trevor Williams reports that the founding fathers may have used lottery tickets partly to fund the Revolutionary War, but even they couldn’t have foreseen how high the stakes would get in the new country they were helping mint. “We actually have a collection of antique lottery tickets from around the world signed by people like Thomas Jefferson and George Washington,” said Patrick McHugh, group CEO for of the lottery business at Las Vegas-based Scientific Games.

One group of Ga. conservatives is making clean, renewable energy a focus

John A. Tures reports that on Thursday afternoon, the Conservatives for Clean Energy Georgia chapter came to LaGrange College in west Georgia, featuring several politicians. They talked about the future of the state, the Republican Party, the country and potentially the planet. Wait. Conservatives for clean energy? What gives?

Staff reports that U.S. Department of Health and Human Services, through the Centers for Disease Control and Prevention, has awarded $492,370 to Georgia to conduct state and local planning and kick off community involvement for the proposed federal initiative “Ending the HIV Epidemic: A Plan for America,” which seeks to reduce new HIV infections in America by 90% by 2030.

Beau Evans reports that Georgia’s reliance on coal to generate electricity for millions of people fell sharply as natural gas grew cheaper over the past decade, a trend that should continue to shut down the state’s polluting plants. That’s according to a report this week that says Georgia Power’s use of  natural gas climbed to more than 40% of all fuel sources the company uses to generate electricity last year, up from 10% in 2008.

The Jolt: Lynn Westmoreland on the art of gerrymandering in Georgia

Jim Galloway, Tamar Hallerman and Greg Bluestein report that the left-leaning news site Slate got its hands on a leaked audio recording from a recent American Legislative Exchange Council meeting that includes very candid remarks from former congressman Lynn Westmoreland. The Coweta County Republican was on hand to discuss redistricting, a topic he helped oversee for Republicans in the U.S. House with wild success in 2010. But the most volatile quotes came from his recounting of a tale from his years in the Georgia Legislature