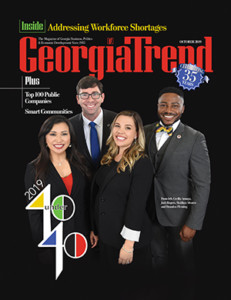 Staff reports, it’s been 23 years since Georgia Trend’s inaugural 40 Under 40, and each year the winners continue to leave us awed and inspired. That’s no different with this year’s group of young leaders, who while representing the nonprofit, healthcare and legal sectors, large corporations and startup entrepreneurial ventures, still find time to volunteer and give back to strengthen and grow the communities around them.

The most innovative office design of 2019 is in North Georgia

Crystal Villareal reports that the design of an office can make or break employee productivity. Every year, Fast Company honors the best design in business with its Innovation By Design Awards, and a uniquely designed office in Georgia won the category for best workplace design. The innovative corporate hub was designed by Gensler, the world’s largest architecture firm, and is in Cartersville, a town with a population of 20,978 that’s about 40 miles north of Atlanta.

Amy Wenk reports that Emory University Hospital Midtown’s plan to build a nearly $500 million cancer tower is moving forward. Permits were recently filed with the city of Atlanta for the project, called the Winship Cancer Center, including a land development permit to begin site work.

Emma Hurt reports that Georgia Power is requesting to raise customer rates by about $10 per month for the average residential user. The request is more than $2.2 billion over the next three years, and hearings before the Public Service Commission are scheduled to happen Monday through Wednesday. Protests are also planned by those who disagree with the hike request.

James Hataway reports that the University of Georgia has signed a contract with the National Institutes of Health for an initial award of $8 million to develop a new, more advanced influenza vaccine designed to protect against multiple strains of influenza virus in a single dose. The total funding could be up to $130 million over seven years if all contract options are exercised.

Doug Walker reports that Pirelli has been named a Global Compact LEAD company by the United Nations Global Compact. Pirelli was recognized for its ongoing commitment to the UN Global Compact and its Ten Principles for responsible business.

Tailgating for a cause

Mary Ann DeMuth reports,  imagine the ultimate tailgate party. It would probably include sampling outstanding barbeque and a variety of craft beers while cheering your favorite college football team with friends as you watch on TV. That’s exactly what the inaugural Que & Brew event will offer this Saturday, Oct. 5, from noon to 5 p.m. in the parking lot of Six Flags White Water. What will make it even more perfect, however, is the fact that all proceeds will go to support Marietta-based liveSAFE Resources, a nonprofit that helps people in Cobb and Cherokee counties who are affected by domestic violence, sexual abuse or elder abuse.

Georgia near the top in HIV risk, report shows

Andy Miller reports that a new analysis underscores the enormous challenges that Georgia faces in fighting HIV. The state ranks No. 3 in HIV risk in the U.S., trailing only Ohio and Nevada, according to the study from Health Testing Centers, which used data from the CDC. Georgia has the leading rate of new diagnoses among states, with 30 per 100,000 people.

Under impeachment clouds, Isakson takes a last shot at stirring Congress to action

Tom Baxter reports that when U.S. Sen. Johnny Isakson let it be known that he planned to introduce one last big bill before his retirement at the end of this year, there was some speculation he might try to break the knot around background checks. The legislation Isakson introduced last week  doesn’t get into that controversy — in fact it pointedly lumps firearms into a larger pool of “implements” which can be used to carry out “mass violence.” He proposes spending a total of $300 million, $75 million to the Centers for Disease Control for four years — to better understand why mass violence has increased while the crime rate has gone down overall.

Kim Jarrett reports that members of the Georgia House and Senate Appropriations Committees expressed concerns about the effects of proposed state budget cuts on employees and services. Kelly Farr, director of Gov. Brian Kemp’s Office of Management, told the committees Friday that he really didn’t know where the cuts would be.

Maya T. Prabhu reports that the Georgia House’s second-highest ranking Republican announced Monday that she was adding her name to the growing list of people asking for a U.S. Senate appointment. House Speaker Pro Tem Jan Jones, a Milton Republican who is the highest-ranking female lawmaker in the history of the Georgia General Assembly, answered Gov. Brian Kemp’s call for applicants to replace retiring U.S. Sen. Johnny Isakson.