Emil Moffat reports that the Georgia Ports Authority has shut down operations in Brunswick and Savannah in anticipation of Hurricane Dorian. Executive Director Griff Lynch said they hope to re-start operations on Thursday afternoon once Dorian has passed. There are only four days a year when the ports are actually scheduled to be shut down. 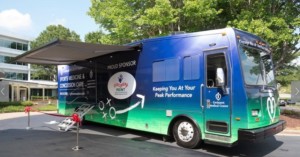 Mary Ann DeMuth reports, with the start of football season, parents’ thoughts often turn to injuries and the possibility of concussions. Gwinnett Medical Center is addressing these concerns with its Sports Medicine and Concussion Care-A-Van. This state-of-the-art mobile concussion care unit is equipped with the latest technology and will be traveling to sports and family events, parks, festivals and childcare centers to provide baseline concussion testing that will aid in the proper diagnosis and treatment of head injuries.

Company to invest $150 million, despite calls for Georgia film boycott

Christopher Quinn reports that despite calls by some in Hollywood to boycott Georgia because of controversial legislation passed this year, two financiers plan to invest $150 million in film productions in the state. Mark Damon of Los Angeles and Adi Cohen of New York, the principals of DCR Finance, plan to invest in Georgia productions that use the duo’s Atlanta partner company, Go Media Productions, for post-production work such as editing and adding special effects and sound.

Alex Gailey reports that Delta Air Lines and Southwest Airlines, the two largest carriers in Atlanta, have canceled hundreds of flights throughout Florida and the Bahamas due to Hurricane Dorian. Florida airports accounted for the bulk of the cancellations.

Staff reports that in Georgia, agriculture remains the number one industry. Farmers and engineers will meet at the NextGenAg 2019, to be held in Auburn, Ga. Sept. 15-16 to exchange opportunities & trends in agriculture & technology.

A Familiar Story, Different Details: The Latest Proposal To Mine The Okefenokee

Emma Hurt reports that South Georgia is home to one of the largest freshwater wetlands in North America: the Okefenokee National Wildlife Refuge. There’s a new plan to mine for titanium nearby, which environmentalists aren’t happy about. It reminds many of a similar fight for the swamp 22 years ago.

Rosie Manins reports that less ethylene oxide than usual will be coming out of the Sterigenics plant in the Smyrna area while construction takes place there to improve emissions controls through January 2020, the global company says. It has already started its “emission reduction project,” which should take total ethylene oxide emissions from the Cobb facility from the current level of about 260 pounds per year down to about 38 pounds per year, company documents show.

Beau Evans reports, it took two years for Tereasa Lowry to lock down a new apartment in Rome after she lost her house in 2009 during the recession. She’s battled severe bouts of depression since before grade school, and without her family’s support while she sought public housing, Lowry is certain she would have wound up homeless.

Washington D.C. is a long way from White County, Georgia. Sometimes, that distance means the needs of constituents can get lost amid partisan squabbles on Capitol Hill. During the summer recess, 9th District Republican Rep. Doug Collins (R-Gainesville) went back to his roots – and his district – to hear firsthand what north Georgia farmers say Congress can do to make their lives better.

Lumsden: Many components to boosting economic development in rural Georgia

Diane Wagner reports that the House Rural Development Council will focus on jobs and high-speed internet access next week when it holds its second of five scheduled meetings this year. This is the third year Rep. Eddie Lumsden, R-Armuchee, has served on the council, which was established to address the economic disparity between rural and urban counties in Georgia. Lawmakers created the Center for Rural Prosperity last year in response to some of the group’s findings.

Sarah Fay Campbell reports that the Georgia House District 71 race is heading to a runoff Oct. 1 following Tuesday night’s neck-in-neck finish between Republicans Philip Singleton and Marcy Westmoreland Sakrison. Sakrison led most of the night, and Democrat Jill Prouty was a close third in early returns, but Singleton pulled ahead as more precinct totals were reported.

James Salzer reports that Georgia legislative leaders scheduled meetings later this month to hear how state agencies plan to respond to Gov. Brian Kemp’s call to cut their budgets, but they may spend that time talking to each other. House Appropriations Chairman Terry England, R-Auburn, said he hoped to invite department heads to attend the Sept. 26-27 hearings to discuss what they propose to cut. But the Kemp administration will tell agencies to ignore those requests, saying it wants to consider the proposals like it would any other budget plans, without legislative interference.