Kemp Orders Evacuation Of Multiple Georgia Counties Ahead Of Dorian

Emil Moffat reports that Georgia’s governor has announced mandatory evacuations for portions of six coastal counties as the area prepares for the possible arrival of Hurricane Dorian. The current projected path of the storm places it along the coast of Georgia sometime midweek. 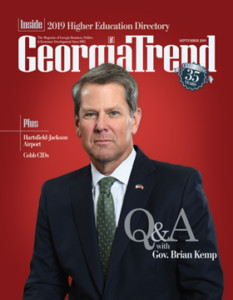 Susan Percy reports, Georgia’s 83rd governor, Republican Brian Kemp, took office in January, after defeating Democrat Stacey Abrams in a close 2018 race. A former secretary of state and Georgia legislator, Kemp campaigned in the primary on gun rights and tough immigration tactics – in one TV spot he pointed a rifle at a teenage boy “interested in one of my daughters,” and in another he talked of rounding up undocumented illegals in his truck – and won the endorsement of President Donald Trump.

Matt Kempner reports, he was a sharecropper’s son who became Coca-Cola’s highest-ranking African American executive. He ran an entire continent of business and was Coke’s go-to leader on race issues. Years before a landmark discrimination lawsuit shook the company, he warned unsuccessfully about bias, pay disparities and a shortage of blacks in top management.

David Allison reports that two top executives of Total System Services Inc. won’t be staying with the company after it merges with Global Payments Inc. TSYS reported Aug. 30 that Patricia A. Watson, senior executive vice president and chief information officer of TSYS, will not become the CIO of Global Payments upon the companies’ merger.

Katie Nussbaum reports that Savannah-area fuel and convenience companies remain on watch and ready to assist as residents begin evacuating ahead of Hurricane Dorian. Colonial Group Inc. has been prepping for the possible arrival of Dorian since last week, according to Ryan Chandler, vice president, Business Development.

Sarah Fay Campbell reports that the special election for the Georgia House of Representative District 71 seat will be Tuesday. There are four candidates in the race to fill the unexpired term of Rep. David Stover, who resigned from office in June. They are Republicans Nina Blackwelder, Marcy Sakrison and Philip Singleton and Democrat Jill Prouty.

An interview with Sen. Johnny Isakson: Looking back on accomplishments, toward the future

Staff reports, on the day after announcing his retirement from the U.S. Senate, Georgia Republican Johnny Isakson sat down for a wide-ranging interview covering past, present and future politics. The senator in his Cumberland offices discussed his 45-year political career.

With Georgia gambling legislation likely, no agreement yet on the spoils

Maggie Lee reports, when it comes to gaming, the odds are always in the house’s favor — so when the government taxes the house, it’s a win for the government. But wrangling over the not-yet-existent spoils will lower the odds against any gaming bill passing in Georgia next year.

The Jolt: MARTA becomes the punching bag in a bellwether House race

Jim Galloway, Greg Bluestein and Tamar Hallerman report that Johnny Isakson’s decision to leave the U.S. Senate has overshadowed a small state House race that could serve as a 2020 prototype in so many ways. The vote is Tuesday, the day after Labor Day – which means a small turnout and a race that could be decided by only a few hundred votes. A runoff would be held Oct. 1.