Staff reports that Savannah-based Gulfstream Aerospace Corp. on Monday announced the National Oceanic and Atmospheric Administration (NOAA) has established a contract for a Gulfstream G550. The aircraft will support NOAA’s weather forecasting and research programs. 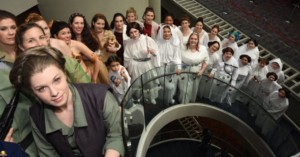 Eric Mandel reports that Georgia’s billion-dollar film industry is a star for the Georgia economy, but it still loses too much post-production work to Hollywood. Len Gibson and Wayne Overstreet say it doesn’t have to be that way. Their new company, Go Media Productions, is investing $150 million into Georgia’s film business that will keep those important post-production jobs like film-editing, sound design and special effects from being lost to the West Coast.

What is Osteopathic Medicine?

Staff reports, for the past two and a half years, the South Georgia community has been awaiting the region’s new, four-year medical program in Moultrie, Georgia. The newest location of Philadelphia College of Osteopathic Medicine, PCOM South Georgia – Southwest Georgia’s only four-year medical program – opened in August to great fanfare. Now that the celebrations have died down, the inaugural class of 55 students is learning how to practice osteopathic medicine—but what does this mean?

Emil Moffat reports, plans to create the largest greenspace in Atlanta received a major boost Tuesday. The Blank Family Foundation is giving a $17.5 million grant to help create Westside Park, which is expected to be 100 acres larger than Piedmont Park. The grant is the largest single gift in the history of the Atlanta BeltLine.

Wes Wolfe reports that the Trump administration has a habit of moving slower regarding environmental regulatory matters than public statements would lead people to believe, and that habit came around to actually benefit the federal government in a ruling announced Monday in U.S. District Court in South Carolina. U.S. District Judge Richard Gergel denied motions for a preliminary injunction made by three separate groups of plaintiffs seeking to halt seismic airgun testing off the Atlantic Coast.

Ross Terrell reports, “East point is the first city in metro Atlanta to develop a city agriculture plan!” Those words echoed through the room at the ArtsXchange in East Point as Kim Karris, executive director of Food Well Alliance, made the announcement. More than 50 people gathered Wednesday to kick off phase one of the program.

Taylor Denman reports that Snellville Mayor Barbara Bender announced Monday night a new project that will expand shopping, dining and entertainment at a new walkable destination called The Grove at Towne Center. The project’s $85 million first phase will commence construction in 2020 and spaces will be ready for businesses in 2021.

Brenda Goodman reports that the state’s Environmental Protection Division launched an immediate investigation Tuesday of a previously undisclosed leak of toxic gas at a Smyrna medical sterilizing facility. The amount of the ethylene oxide leaked last month was less than 6 pounds, said Sterigenics, the company that runs the sterilization plant. If it had been more than 10 pounds, the company would have been obligated to report the leak quickly to state regulators.

Jill Nolin reports, do Georgia Democrats see a realistic opportunity to flip the state House of Representatives back to Democratic control for the first time in 15 years? House Minority Leader Bob Trammell, who represents a rural district, was asked how his party sees its prospects of coming out on top in the costly race to control the chamber while on Tuesday’s Political Rewind on GPB.

Ariel Hart reports that the state’s lawsuit against opioid manufacturers has been transferred to a special court in Gwinnett County originally set up to hear business disputes. Georgia Attorney General Chris Carr, who is in charge of the case on behalf of the state, requested the move. He said in a statement that it was good news because the court would have more resources to deal with such a complex case.