Mark Niesse reports that Georgia recently finalized a plan to spend the public’s money on subsidies for high-speed internet lines, laying the foundation for broadband expansion in rural areas. Whether it will work remains to be seen. Representatives for some internet providers criticized the state’s subsidy rules as being overly burdensome, according to public comments obtained by The Atlanta Journal-Constitution under the Georgia Open Records Act. 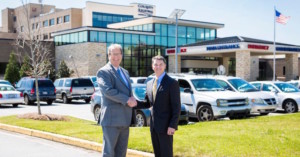 Karen Kirkpatrick reports that banks across the state have a broad impact on the communities they serve – from making loans to small businesses to supporting rural hospitals, which have been facing demographic, economic and industry challenges for years. Ameris Bank, headquartered in Moultrie, donated $1.65 million this year (on top of $800,000 in 2018) to support 16 rural hospitals in its South Georgia service area.

Michael E. Kanell and Greg Bluestein report that Atlanta-based Equifax on Monday announced it has reached a $700 million-plus settlement with the government that, pending court approval, will mean an end to legal action stemming from a massive data breach two years ago. The deal calls for the company to create a consumer restitution fund of up to $425 million, to pay $290.5 million to state and federal regulators and to cover millions of dollars in lawyers’ fees assessed in the many lawsuits filed.

Jessica Saunders reports that the United States Air Force has awarded Georgia Tech Applied Research Corp. a $245.9 million contract for electronic warfare and avionics systems support.  The contract provides for essential engineering, research and development capabilities and services for the development and sustainment of systems, according to the Department of Defense.

Why Georgia’s Energy Supply Is About To Get Greener

Virginia Prescott and Amy Kiley report that Georgia’s energy supply is getting greener. Every three years, the Public Service Commission votes on Georgia Power’s overall strategy, detailed in its Integrated Resources Plan. This year’s plan calls for 2,260 more megawatts of renewable energy development. Most of that will come from solar expansion.

Maria Saporta reports that top Atlanta business and civic leaders unveiled a vision Monday morning to turn Atlanta into a living city of peace. The plans included hosting the World Summit of Nobel Peace Laureates on a regular, rotating basis; attracting the headquarters of the Permanent Secretariat of the World Summit of Nobel Peace Laureates; and creating a Peace University as a collaboration between Atlanta’s institutions of higher learning.

Georgia Schools Given OK To Move Away From Year-End Tests

Grant Blankenship reports that Georgia has been given the green light by the U.S. Department of Education to experiment with leaving high stakes, year-end testing behind. But now Georgia and three other states — New Hampshire, North Carolina and Louisiana — have permission to find other federally compliant ways to assess students.

Jan Skutch reports that Chatham County District Attorney Meg Heap on Sunday was named Georgia’s 2019 District Attorney of the Year by her peers in the state’s district attorney’s association. The award was presented during the group’s annual conference at Jekyll Island and was based on nominations by her colleagues and community leaders.

Jim Galloway, Greg Bluestein and Tamar Hallerman report that Teresa Tomlinson is going there. In a first batch of detailed policy positions this morning, the Democratic candidate for U.S. Senate will endorse the legalization of marijuana for recreational use. Tomlinson, the former mayor of Columbus, also endorsed marijuana’s regulation and taxation.