Staff reports that the Georgia Department of Economic Development announced today that StudentBridge, an award-winning company providing student engagement and lifecycle solutions to colleges across the nation, will accelerate its growth in both financial and human capital, continuing its $7.5 million investment and creating 50 new jobs over the next two years from its new headquarters in Chamblee. 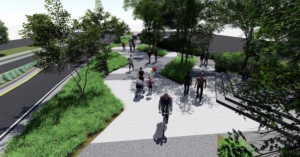 Mary Ann DeMuth reports that multiple transportation and infrastructure projects will take place throughout the Gwinnett Place Community Improvement District (GPCID) this summer. (The GPCID is a district where businesses use self-imposed taxes to fund improvements.) The Georgia Department of Transportation and the Gwinnett County Department of Transportation will be implementing the projects, which are funded by GPCID, a Gwinnett County special purpose local option sales tax (SPLOST) and a State Road and Tollway Authority grant.

Michael E. Kanell reports that a federal agency on Tuesday ruled that imported Chinese quartz has been unfairly damaging American companies, concluding that costly duties on those goods are justified. In a unanimous decision, the U.S. International Trade Commission agreed with most complaints originally brought by a Minnesota company, while rejecting arguments of many other firms – including a number in Georgia.

David Allison reports that a big new mixed-use development is planned in downtown Newnan, Ga., south of Atlanta. Atlanta-based The Residential Group is proposing The District at Newnan on 6.7 acres on East Broad Street in the city’s historic area. Plans call for the renovation and reuse of a late 1800s office building and an attached three-story warehouse into 19,100 square feet of commercial/office space as well as the construction of 348 luxury apartments.

Rachel Lord reports that Phoebe Putney Health System is already known as one of the largest employers in southwest Georgia, but the health system has now been named one of the entire state’s best employers in a list by Forbes. Forbes partnered with the market research company Statista to survey 50,000 American workers and pinpoint the organizations liked best by employees.

Jenna Oden reports that the city of Hogansville announced Tuesday that it has received a $200,000 Rural Business Development Grant from the U.S. Department of Agriculture that will go toward the restoration and renovation of the Royal Theatre, which is currently being used as city hall.  “The grant itself is to spur economic development in rural communities,” said Hogansville City Manager David Milliron.

Here’s the $1 million plan for tackling blight in Columbus

Allie Dean reports that there is no time like the present to rid Columbus of 150 eyesores, according to John Hudgison, Columbus Building Inspections and Code Enforcement Director. That’s how many rotting, vacant, burnt down and abandoned homes are on his department’s list to be demolished, and a recent allocation of $1 million from the Columbus Council will help him remove some of them.

Trevor Williams reports that Atlanta-based Global Franchise Group LLC has launched the first Hot Dog on a Stick franchise in China as the California-born brand expands the reach of its decidedly American concept in Asia. Founded on a beach in Santa Monica in 1946, Hot Dog on a Stick has spent seven decades serving up its namesake item, but it has also added other stick foods like carrots, zucchini and even bananas fried in a signature “party batter.”

Wes Wolfe reports that Sea Island Acquisition dug in regarding its arguments to stay discovery in a wetlands-filling lawsuit brought against it, and reiterated its arguments for dismissal of the case outright, in filings last week with the U.S. District Court in Brunswick. Glynn Environmental Coalition and Center for a Sustainable Coast brought the lawsuit because of alleged misconduct by Sea Island in the filling of 0.49 acres of wetlands adjacent to the Inn at Sea Island, on St. Simons Island.

PAs, nurse practitioners could get expanded roles in Georgia

Diane Wagner reports that two legislative study committees will examine the roles of physician assistants and advanced practice registered nurses with an eye to possibly expanding them next year. Sen. Chuck Hufstetler, R-Rome, will chair his chamber’s committee, he told members of the Rome Seven Hills Rotary Club on Tuesday. The Georgia House created a similar committee.

Adrianne Haney and Faith Abubey report that former Georgia gubernatorial candidate Stacey Abrams hopes her trip to the west coast will ease tensions between the state and the Hollywood film industry. Abrams began her trip to Los Angeles Tuesday morning meeting with film executives who have threatened to take their production elsewhere if Georgia’s anti-abortion law — more commonly known as House Bill 481  or the “heartbeat” bill — takes effect.

Nick Wooten reports that Fort Benning will not house migrant children, federal officials said Tuesday. A spokesperson for the U.S. Department of Health and Human Services’ Administration for Children and Families said that the military installation was no longer available to shelter the children.

Georgia may yet tax Walmart.com Rolexes, short-term rentals, ride-hailing and other online commerce

Maggie Lee reports that a new organization is lobbying to close what it calls a “loophole” in Georgia’s internet tax law that it says are costing the state, counties, cities and people who don’t have internet access. “Because they’re not being collected, those are dollars that are not being used in our communities, and for me, that’s a problem,” said Billy Honor, at a state Capitol press conference on Tuesday.

How the legacy of a dead gerrymander artist might impact Georgia

Jim Galloway reports, when 75-year-old Thomas Hofeller died in August at his home in Raleigh, N.C., he was hailed as the Republican gerrymandering genius who understood that control of Congress was rooted in the 50 state legislatures responsible for drawing the boundaries for the nation’s 435 congressional districts. Those state lawmakers determined which voters would vote for which members of Congress.