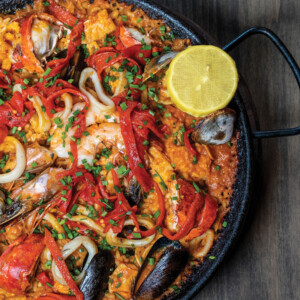 Sucheta Rawal reports that on a Friday night, downtown Alpharetta is bustling with families celebrating, groups of friends grabbing drinks and romantic couples having a date night by candlelight. In the past few months, this suburban enclave has become a hotspot with the opening of new, innovative restaurants, such as the Spanish-Latin restaurant Fogón and Lions by Chef Julio Delgado (formerly at New Realm Brewing and JP Atlanta).

Michael E. Kanell reports that Sandy Springs-based Newell Brands, the parent company of Sharpie and Rubbermaid, has announced plans to slash 13% of its workforce, cutting thousands of jobs worldwide. The cuts, part of a restructuring from five divisions into three, will save the company up to $250 million, according to Ravi Saligram, Newell’s chief executive, who announced the plan Monday in an online statement.

Emily Wu Pearson reports that the Federal Reserve Bank of Atlanta defines housing affordability as a family earning a median income being able to pay for a median-priced home without spending more than 30% of their budget, based on guidelines from the U.S. Department of Housing and Urban Development. The latest numbers show that housing affordability may be improving as demand drops, leading to falling home prices.

Staff reports that a new president has been named at Clayton State University. Dr. Georj Lewis will begin his new role on Feb. 1. Lewis is currently the president of Atlanta Metropolitan State College, a position he has held since November 2019 after having served as interim president since July 1, 2019.

Jill Nolin reports that advocates for maternal health gathered outside the state Capitol Monday to rally for more resources to support Georgia’s mothers. “We’ve made some strides over the last several years – and I don’t want to discount that – but we have a lot more work to do. Our goal cannot just be, ‘Don’t die,’” said Ky Lindberg, chief executive officer of Healthy Mothers, Healthy Babies.

Hank Rowland reports that U.S. Rep. Buddy Carter says Congress can eliminate the IRS with the adoption of a consumption tax, and he’s asking voters in his district if they support the idea. Carter, R-1, is conducting a survey that asks: Would you support a flat consumption tax that would replace the IRS and all income and payroll taxes? Respondents have three answers they can choose from: Yes, No, Undecided.

Asia Ashley reports that protest hearings have caused the Georgia Access to Medical Cannabis Commission to surpass its approved budget, according to the commission’s executive director. Andrew Turnage, who became executive director in May 2020, appeared before the House Appropriations General Government Subcommittee Jan. 20 to present an amended budget request for the current fiscal year.

Maggie Lee reports that Georgia’s governors often campaign on their budget plans, and a draft budget is is a governor’s first big act of business every year. But in truth, much of the budget is tied to forces beyond any Georgia governor’s power.

T.A. DeFeo reports that when Katie Chubb wanted to open a new birthing center in Augusta, she wasn’t surprised the local community would support the new service. Rather, it was who opposed it: three local hospitals. To open her center, she needed a so-called certificate of need, state approval that confirms the service’s need.

The Jolt: Georgia voters weigh in on moving up presidential primary

Tia Mitchell, Patricia Murphy and Greg Bluestein report that President Joe Biden’s plan to put Georgia near the start of the presidential primary calendar still faces significant hurdles in the Republican-controlled state. But an Atlanta Journal-Constitution poll shows that many voters are receptive to the idea.