Despite ongoing investigation and scientific disputes, a plan for strip mine near Okefenokee advances

Mary Landers reports that Georgia regulators are pushing forward publicly on a controversial proposal to strip mine near the Okefenokee. But behind the scenes, documents obtained by The Current reveal those same regulators are making plans to fine the company for failing to follow regulations as it collected its data for the mine. 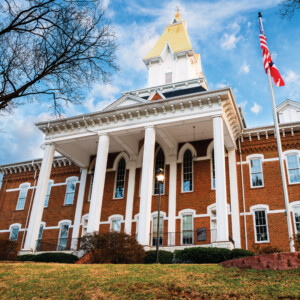 A journey of growth and innovation

Betty Darby reports, it was an unlikely beginning: an abandoned federal property turned over to the state and made the home of a military school, only eight years after the end of the Civil War. At the time, surely no one imagined the school would one day celebrate its 150th anniversary – much less as a major pipeline of U.S. military talent.

Mohawk Industries warns of shortfall; net income down 83% from year before

Michael E. Kanell reports that Mohawk Industries, one of the nation’s premier flooring companies, has warned investors that its sales and profits are taking a beating because of the housing slump of recent months. The Calhoun-based firm said in a statement earlier this week that it had cut back on production, temporarily shutting down some factories as it scrambled to adjust to a rapidly chilling market for housing and the materials that go into homes.

Emily Jones reports that researchers have developed the world’s first vaccine for honeybees – and field tested it here in Georgia. Earlier this month, the US Department of Agriculture granted a conditional license for the vaccine against American Foulbrood, a devastating bacterial disease.

Going up? Here’s the plan to change the Talmadge Bridge to accommodate larger cargo ships

Staff reports that the Georgia Department of Transportation is moving forward with its first project involving a new contracting option the General Assembly authorized two years ago. The State Transportation Board voted Thursday to proceed with a plan to replace the cables on the Talmadge Bridge in Savannah and raise the structure to more easily accommodate cargo ships calling at the Port of Savannah.

Jill Jordan Sieder reports that Georgians are likely to receive two one-time tax refunds this year, if lawmakers approve Gov. Brian Kemp’s proposal this legislative session. An income tax refund will mean $250 for single filers and $500 for joint filers this spring, and homeowners are likely to get about $500 in property tax refunds by year’s end.

Stephen Fowler reports that Georgia’s prominent role in national politics continues to grow, so too might the financial benefit to businesses and industries across the Peach State. Recent high-profile elections for governor, U.S. Senate and the 2020 presidential race saw hundreds of millions of dollars flow each year into campaign coffers and, in turn, into local businesses, restaurants, hotels and event venues that have welcomed a national audience.

Asia Ashley reports that Medicaid expansion will likely be a debated topic in health care discussions among Georgia legislators this session. As states prepare to unwind the expanded Medicaid program granted in 2020 because of the COVID-19 pandemic, an expansion Republicans argue has cost the state billions, Democrat leaders are continuing their years-long advocacy for Medicaid expansion.

Aaleah McConnell reports that new leadership and a slew of freshman lawmakers set out to make their mark under the Gold Dome this session, changes from last year’s “brain drain’” are unfolding at the Capitol. Much of the changeover at the Capitol is due to lawmakers either retiring or resigning to pursue higher political office.

School choice legislation is likely from Georgia lawmakers this session

T.A. DeFeo reports that Georgia lawmakers are almost certain to discuss school funding and even school choice legislation during this year’s legislative session. “I think we’re going to have a very robust discussion when it comes to school funding, when it comes to vouchers and other issues that come before us,” House Speaker Jon Burns, R-Newington, said during a press conference this week.

Why Bo Hatchett was selected as Senate floor leader

Brian Wellmeier reports that State Sen. Bo Hatchett, R-Cornelia, representing District 50, has been selected for a third year as one of two floor leaders in Georgia’s Senate, Gov. Brian Kemp’s office announced. As a senior floor leader in Georgia’s general assembly for a second session, Hatchett serves as a proxy for Kemp’s office and pushes for legislation that aligns with the governor’s agenda.

Curt Yeomans reports, there will be several Gwinnettians, from both sides of the aisle, holding key roles in each chamber of the General Assembly this year. One of those will be state Rep. Chuck Efstration, who will be the new House Majority Leader in the Georgia House of Representatives while Rep. Sam Park, D-Lawrenceville, will be the Minority Whip.

Rules vote to mark milestone for medical cannabis in Georgia

Dave Williams reports that the Georgia Access to Medical Cannabis Commission is expected to vote Jan. 25 on rules governing all aspects of the program from growing the leaf crop in greenhouses under close supervision to manufacturing low-THC cannabis oil to treat patients suffering from a variety of diseases to selling the product at a network of dispensaries across the state.

Ariel Hart reports that Georgia’s maternal mortality rate — already among the worst in the nation and even the developed world — got even worse during the pandemic, Dr. Kathleen Toomey, Georgia Commissioner of Public Health, told state legislators on Wednesday. Toomey did not detail the increase or the new rate, saying the exact numbers would be released in a report next month.