Stephen Fowler reports, as Gov. Brian Kemp took the stage at the Georgia Chamber’s annual “Eggs & Issues” breakfast Wednesday, the song “We Are The Champions” accompanied a montage of University of Georgia’s national championship victory this week. But the second-term governor had other reason to celebrate, too. 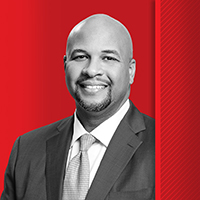 Red, Blue & You: Education is a Team Sport

Tharon Johnson writes, it’s no secret that the State of Georgia is struggling with its public education system. We spend an average of $11,200 per student, per year in this state, and while that may sound like a lot, we rank 33rd in the nation in per-student spending.

Rodney Ho reports, the CNN Center will soon be no more. After more than 35 years, CNN is leaving its downtown mainstay in stages this year, with the entire operation moving back to renovated, upgraded space at the Techwood Turner 30-acre campus in Midtown, according to a CNN spokeswoman.

Trevor Williams reports that the Georgia Department of Economic Development’s December trade leads, circulated in the monthly newsletter of its International Trade Division, revealed a hunger around the world for food items sourced from the Peach State. The December notice included requests for feed additives for cattle, pork and chicken from Brazil, where the appetite for Georgia-grown products seems to be strong each month, along with prepackaged nut products to Chile.

James Hataway reports that four University of Georgia programs will receive federal support as part of the $1.7 trillion funding package signed into law in late December. These funds will support scientific research, engineering projects and outreach programs that benefit citizens living in Georgia and throughout the nation.

Why is American Airlines ending service in Columbus? Here’s what impact it may have

Rome Mayor Sundai Stevenson gave the final “no” vote to break the city commission stalemate over a special use permit for a cryptomining operation in West Rome. The main issue city commissioners voiced regarding the proposal was the potential for a constant noise in the area.

How NGMC Gainesville received funding for its helipad

Brian Wellmeier reports that U.S. Sen. Jon Ossoff held a press conference alongside local leaders at Northeast Georgia Medical Center Wednesday, talking over the commotion of hammers clanking against steel beams as construction crews continued work on the hospital’s expansion of its North Tower. Speaking to reporters and NGMC leadership, the Democrat touted his role in a bipartisan effort to procure federal funding for a $2.1 million helipad and an elevator at the new tower, a project scheduled for completion in 2025.

Industrial moratoriums in Chatham County expire soon. What have these cities accomplished?

Nancy Guan reports that three Chatham County municipalities implemented a moratorium on industrial rezoning or industrial development applications in 2022. All three freezes stand to expire in the coming months if not renewed by their local governments – Garden City, Bloomingdale and Port Wentworth.

Terry Richards reports that a Cook County activist group has reached a settlement with a manufacturer intending to build a wood pellet plant in the city. On July 8, the Georgia Environmental Protection Division issued an air quality permit to Spectrum Energy to build a wood pellet manufacturing plant on Cook Street in Adel, according to the settlement with Concerned Citizens of Cook County, a nonprofit organization.

T.A. DeFeo reports that Georgia state lawmakers are pondering how the state should regulate the waste generated from the legal manufacturing of cannabis products, including hemp and medical marijuana. Last week, the House Study Committee on Cannabis Waste and Recycling held a two-day hearing to discuss the possibilities, which include composting, additional manufacturing and energy production.

Ross Williams reports that the Georgia House and Senate gaveled in for a second day of lawmaking Wednesday. Both chambers passed resolutions laying out rules for the rest of the session, but one change has First Amendment advocates concerned. Both chambers’ rules have new provisions shielding communication between lawmakers and third parties under legislative privilege.

Dave Williams reports that Gov. Brian Kemp likes to tout how his smart shepherding of state resources and track record landing major economic development projects helped make Georgia a success story during the pandemic. He’s about to get a chance to tell that story on an international stage. Kemp’s office announced Wednesday he will be addressing the annual World Economic Forum in Davos, Switzerland, next week.

Patricia Murphy, Greg Bluestein and Tia Mitchell report that U.S. Rep. Andrew Clyde, in just his second term in office, has been appointed to the powerful House Appropriations Committee. The high-ranking perch becomes all the more notable when you recall that Clyde was among the 20 far-right lawmakers who initially blocked Kevin McCarthy from becoming speaker, but eventually relented.