Staff reports that Gov. Kemp announced that Renewal by Andersen, the full-service window replacement division of Andersen Corporation, will create 900 new jobs and invest more than $420 million in a new manufacturing facility in Henry County. It will be the company’s first manufacturing facility in Georgia, joining an Andersen Logistics distribution center located in Douglasville and an Andersen Windows and Doors office in Marietta. 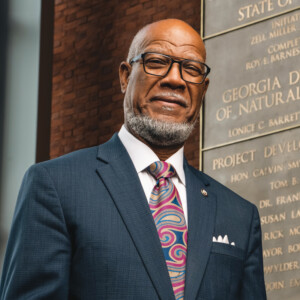 Susan Percy reports, it is hard to imagine the Georgia House of Representatives without its dean: Calvin Smyre, the Columbus Democrat who served for 48 years and was the longest-tenured member of the legislature when he retired last year. An early mentor told him, “Politics is public service,” and, he says, “a bell went off in my mind.”

Kelly Yamanouchi reports that for decades, inspecting power lines for defects was a largely manual task — a chore for workers on the ground and crews in helicopters. But as infrastructure ages, and companies face mounting labor challenges, big utilities are turning to new sets of eyes in the skies — drones.

Staff reports, a three-dimensional marketing agency headquartered in Atlanta and Las Vegas, Nevada, announced that they will consolidate operations in an 80,000 square-foot facility located off Ga. 140 in Armuchee. Think 360 Inc. designs and manufactures tradeshow displays of corporate interiors and demonstration centers with expertise in outdoor activities, museums and retail stores.

The latest on 1.2 million square feet in industrial space proposed off Ga. 365

Jeff Gill reports that a proposed development featuring more than 1.2 million square feet of industrial space off Ga. 365 in northeastern Hall County got initial approval Tuesday, Jan. 3, from the Hall County Planning Commission. The board’s recommendation now goes to the Hall County Board of Commissioners, which is set to take final action after a Feb. 9 public hearing.

John Ruch Reports that the Georgia Trust for Historic Preservation is seeking a new leader as president and CEO Mark C. McDonald is retiring after a nearly 40-year career in protecting the state’s historic sites for future generations. McDonald has led the Atlanta-based statewide nonprofit for nearly 15 years and will continue to do so during a search and transition period expected to extend into the fall.

Lauren McDonald reports that a night charter school program serving students in Glynn and surrounding counties may have to close its doors in June if needed funding is not found. Coastal Plains Education Charter High School, which opened its first site in 2017 in Glynn County, serves nearly 2,000 students in South Georgia through an online program.

Jill Jordan Sieder reports that Janet Starley is a 62-year-old hairstylist who lives in a modest four-unit home in Lithonia that serves as a support center for formerly incarcerated women. When she’s not cutting hair at Great Clips, she spends her off days cleaning houses and pet-sitting.

Ray Glier reports that State Rep. Ron Stephens, a Savannah Republican, wanted to make a point about gambling in the state of Georgia. During a 2021 hearing on legalized sports gambling, he walked to the well of the house and said he was filing a bill to outlaw all gambling in the state.

Dave Williams reports that the widow of the late Georgia House Speaker David Ralston is headed into a runoff in a special election for Ralston’s Northwest Georgia House seat. Sheree Ralston, executive director of the Fannin County Development Authority, received 45% of the vote Tuesday in a five-way race in House District 7.

The Jolt: Georgia Republicans at the center of House speaker chaos

Patricia Murphy, Greg Bluestein and Tia Mitchell report that Tuesday was supposed to be a victory lap for Republicans and Kevin McCarthy, who wanted to celebrate their newly won House majority. Instead, the GOP watched an embarrassing and historic debacle, as McCarthy failed three times to win the votes he needed to succeed Nancy Pelosi as House speaker.