Georgia sees its population grow by 1.7% amid the pandemic 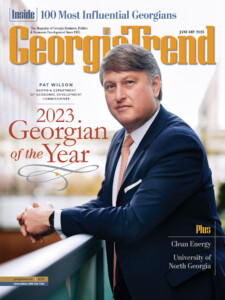 2023 Georgian of the Year: Successfully Selling the State

Kenna Simmons reports, it was 2010 and Gov. Sonny Perdue’s last legislative session had ended. And Pat Wilson was tired. He’d served as director of government affairs, promoting the legislative agenda of the first Republican elected governor in Georgia since Reconstruction, for the past three years.

Georgia economic trends to watch in 2023

J. Scott Trubey and Zachary Hansen report, as Georgia heads into the New Year, the state is venturing into some economic uncertainty. Companies continued to struggle finding workers, though the potential for economic slowdown raises fears of layoffs in 2023.

Sofi Gratas reports that the Georgia Department of Human Services and Department of Community Health are asking low-income families currently enrolled in Medicaid and PeachCare for Kids to update their contact information in the state’s public health insurance portal, Georgia GateWay. If they don’t, they could lose coverage in 2023.

Dave Williams reports that fifty years after the Cumberland Island National Seashore was established, the National Park Service (NPS) is pushing a plan that essentially would double daily visitation to the remote barrier island. While the NPS is selling its Visitor Use Management Plan as a way to provide access to the island’s unique natural beauty to a wider range of visitors, preservationists say the plan would ruin what makes Cumberland special.

Restored wetlands protections may not prevent mining near the Okefenokee

Mary Landers reports that the Biden administration on Friday announced a final rule that restores protections in place prior to 2015 under the federal Clean Water Act for streams, wetlands, and other critical waterways. The action, announced by the U.S. Environmental Protection Agency and the U.S. Department of the Army, strengthens protections for sources of drinking water as well as for wetlands and water bodies vital to wildlife.

Sammie Purcell reports that Georgia is making a statewide push for more foster families after a drop apparently exacerbated by the COVID-19 pandemic. The Department of Human Services (DHS) announced a statewide marketing campaign to recruit more foster parents in August of this year.

Carlton Fletcher reports that Henry Mathis has been around politics long enough to understand one indisputable truth: Elections are all about timing. Undeterred by a pair of losses in past mayoral campaigns, Mathis announced before a crowd of well-wishers on New Year’s Day that he is again running for the seat held for the past three-plus years by Mayor Bo Dorough.

Diane Wagner reports, for the first time, state Rep. Matt Barton, R-Calhoun, will be representing the Shannon area, in addition to a majority of Gordon County. And Sen.-elect Colton Moore, R-Trenton, will be sworn in to represent Armuchee and northwest Floyd, along with all of Chattooga, Dade, Walker and Catoosa counties.

Jeff Gill reports that Soo Hong loved school as a youth in her native South Korea, so her family’s move to the United States when she was 10 was difficult. “I went to school and did not know what to do at all, and it was very frustrating,” Hong said, recalling early years growing up in Cobb County.

Doug Richards reports that Georgia lawmakers can expect another round of anti-abortion legislation this year – now that the U.S. Supreme Court has overturned the right to abortion and the state has implemented the heartbeat law. State law now restricts doctors from performing abortion services after about six weeks of gestation.

Mark Niesse reports, another prolonged and contentious election year in Georgia has legislators considering whether to kill off runoffs once and for all. Georgia’s unusual system of requiring a runoff whenever candidates fall short of a majority could be changed.