Staff reports that Georgia Gov. Brian Kemp said he is declaring a state of emergency as the state prepares for freezing winter weather with temperatures expected to plummet into the teens this weekend. The declaration allows for supplies, particularly propane, to be delivered for residential and commercial needs. 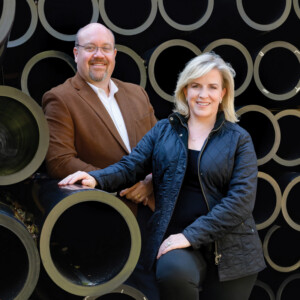 Building Like Gangbusters: Chattahoochee Hills Mayor Tom Reed, left, and Dominique Love, developer of a restaurant incubator that will be located in the new Ceres community, at its future site
Photo: DaemonPictures.com

K.K. Snyder reports, understandably, South Fulton County continues to define what it wants to be when it grows up and out. Ideally located near Hartsfield-Jackson Atlanta International Airport with ample room for development, it is a target for new business and industry that benefits from those logistics.

Ariel Hart reports that twenty-one Georgia hospitals are in line for millions in additional funding, possibly over several years, to hire more health care workers and ensure hiring diversity. The new federal money is estimated at nearly $500 million a year and will go to 21 teaching hospitals across the state.

John Bailey reports that Harbin Clinic and Atrium Health Floyd’s corporate offices in North Carolina confirmed Wednesday that the medical providers are working toward what they’ve termed an affiliation. Harbin Clinic notified its employees of the potential of the merger early Wednesday. No details on the particulars of the deal or what stage the negotiations are in were available Wednesday.

Homeless encampment celebrates the holidays, looks to the future

Nikolai Mather reports that Christmas came early for Charles Hardy. The head of Athens Alliance Coalition had been trying to figure out presents for residents of 1st Step, a camp for homeless Athenians. One rainy December morning a couple days before Christmas, a volunteer named Patricia Vinette showed up with two giant Santa-style sacks.

Staff reports that the chairs of the five largest metro counties in Georgia met recently to discuss shared challenges and solutions facing the region. This think tank provides an opportunity to learn best practices, develop cross-county collaboration and focus on collective solutions that impact all residents.

Gov. Kemp Announces Over 70 Appointments to Boards, Authorities, and Commissions

Staff reports that on Dec. 21, Governor Brian P. Kemp today announced the appointment and re-appointment of more than 70 individuals to the state boards, authorities, and commissions.

What should Georgia do with its $12 billion-surplus? Experts: spend it on education, medicaid, tax credits and refunds.

Tammy Joyner reports that Georgia is sitting on nearly $12 billion of surplus, the most cash on hand in state history.  Here’s what some fiscal and government experts suggest doing with some of the windfall.

Asia Ashley reports that efforts to restrict protests and riots stalled in several states this year, but the momentum could be revived as states prepare to start new legislative sessions in 2023. Georgia legislators introduced the Safe Communities Act of 2021 (SB 171) in February 2021 which sought to prohibit protests on public property without a prior permit.

More than 500,000 Georgians could begin to lose health coverage by spring if pandemic-era Medicaid relief ends

Jill Nolin reports that hundreds of thousands of Georgians who have had health insurance through Medicaid during the pandemic could begin to lose their coverage this coming spring under the proposed federal spending bill unveiled this week. The congressional proposal would end the pandemic-era rule requiring states to continue covering Medicaid enrollees even if they no longer qualify under a state’s eligibility rules.

Rebecca Grapevine reports that federal government should give Georgia and other states more time to submit corrections to new maps that show where broadband service does not reach, Georgia’s congressional delegation urged in a letter Wednesday. At stake is how the federal government allocates $42.5 billion in funding earmarked for bolstering broadband in the infrastructure spending bill Congress passed last year.

US Rep. Ferguson voted in Georgia county where he no longer lives, records show

Tia Mitchell and Mark Niesse report that U.S. Rep. Drew Ferguson, a Republican from west Georgia who has raised concerns in the past about election fraud, voted three times this year in Troup County. But Ferguson no longer lives at the address where he’s registered to vote after he sold his house in April and moved in with his wife two counties away.