Malia Thomas reports that the Adel-Cook County Chamber of Commerce will hold a ribbon-cutting ceremony for the city’s new medical cannabis dispensary. Trulieve Cannabis Corp, one of the leading cannabis companies in the U.S., will hold the event at its indoor production plant at 355 S. Cook Industrial Parkway, 11 a.m. Friday, Dec. 2. 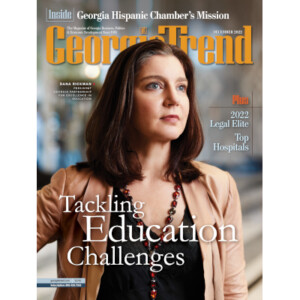 The Key to Prosperity

Patty Rasmussen reports, few would argue with the premise that today’s educators need allies, especially as schools become a place to address the broad needs of families and communities. The Georgia Partnership for Excellence in Education, an umbrella organization founded 30 years ago, has become a fierce advocate for educators.

Kelly Yamanouchi reports that Delta Air Lines is taking applications for flight attendant positions, with plans to hire 4,000-6,000 in-flight crew members next year. As Atlanta-based Delta staffed back up for a recovery in air travel, the airline said it hired a record 4,300 flight attendants over the last year.

Staff reports that Savannah College of Art and Design (SCAD) announces the unveiling of FORTY FOUR, the university’s new, state-of-the-art 10-story residence hall, welcoming students for the 2022-2023 academic year. Named in honor of the forty-four years since SCAD  was founded by President Paula Wallace, FORTY FOUR is the first phase of SCAD Atlanta’s transformational development projects on Spring Street in the upper Midtown corridor.

Kenna Simmons reports, not that you need another reason to visit Savannah in the spring, but you can now register for the Georgia Logistics Summit, held at the Savannah Convention Center March 8, 2023. The summit will examine how Georgia’s ports touch every facet of commerce, along with private-sector outlooks on supply-chain visibility tools and platforms that address short- and long-term technology needs for the logistics industry.

T.A. DeFeo reports that the feds are sending roughly $100 million to the Georgia Department of Public Health to help it bolster its health infrastructure. The Centers for Disease Control and Prevention awarded the DPH $99.8 million over a five-year period for “strengthening public health infrastructure, work force and data systems,” Nancy Nydam, a DPH spokeswoman, told The Center Square.

John Ruch reports that a new Georgia-based disability rights and justice group aims to unite advocates in 14 states in the South, a region notorious for inequities and discrimination. New Disabled South (NDS) is a nonpartisan effort, though founder Dom Kelly is fresh from coordinating similar advocacy with unsuccessful Democratic gubernatorial candidate Stacey Abrams and her voting-rights nonprofit Fair Fight Action.

John Bailey reports that Gov. Brian Kemp called faked active shooter calls to schools, including Model High School, a “cruel hoax” and pledged that the FBI is investigating the calls as acts of “domestic terrorism.” Calls were reported at Valdosta High School, Savannah High School, Brunswick High School and other schools in Georgia, Tennessee and Alabama.

Dave Williams reports that a legislative study committee looking for ways to help accommodate an expected increase in electric vehicles plying Georgia highways approved a series of wide-ranging recommendations Wednesday. But the lawmakers either tabled or defeated proposals on some of the most controversial issues the panel took up during a half dozen meetings across the state this summer and fall, including how to ensure utilities that build EV charging stations don’t compete unfairly with convenience stores.

Runoff for US Senate will cost Georgia taxpayers millions of dollars

Mark Niesse reports that runoff for the U.S. Senate is expected to cost taxpayers over $10 million in the Atlanta area alone and many millions of dollars more across Georgia. Critics of Georgia’s runoff system say it’s wasteful and unnecessary.