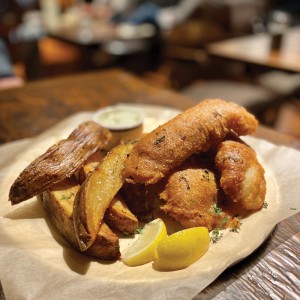 A Place to Eat and Relax: Fish and Chips
Photo: Contributed

Kelly Yamanouchi reports that this year’s holiday shopping season ramps up, shipping industry experts say supply chain issues that plagued the season last year have alleviated, but there are other dynamics at play. “The supply chain is in a lot better shape than it was a year ago,” said Steve Denton, CEO of UPS warehouse and fulfillment subsidiary Ware2Go.

John Druckenmiller reports that the unemployment rate across Northwest Georgia saw a rare increase in October compared to the previous month, with some area counties returning to the point they were at a year earlier. It mirrored the increase in first-time jobless claims for the month posted last year.

Julia Roberts reports that unpredictable commute times and traffic congestion are issues the Transform 285/400 project seeks to address. By focusing on reconstruction and expansion, this project will create long-term infrastructure stability and ultimately improve the travel and safety of Perimeter commuters.

Marisa Mecke reports that conservation groups are urging the National Oceanic and Atmospheric Administration’s Fisheries Service to implement vessel speed regulations in an effort to save the last of the North Atlantic right whales. The slate of conservation groups which filed an emergency rulemaking petition regarding the boating speeds on this month included the Center for Biological Diversity, Conservation Law Foundation, Defenders of Wildlife and the Whale and Dolphin Conservation.

Taylor Cooper reports, attorneys for the city of Brunswick allege that at least since 1969, management of defendant Honeywell knew that metallic mercury dumped into the Turtle River estuary would methylize, bioaccumulate in the fish and poison people who ate the fish. The city of Brunswick made the allegation in a lawsuit filed last month against Honeywell, owner of the former LCP Chemicals plant site, and Georgia Power.

Abraham Kenmore reports that the Georgia Supreme Court has allowed a Fulton County Superior Court ruling that paved a path for Saturday voting in a U.S. Senate runoff to stand, according to a unanimous order issued Wednesday. The ruling followed a decision Monday in which Court of Appeals for Georgia refused to block an order from a Fulton County judge allowing voting this Saturday, Nov. 26 in the Senate runoff between incumbent Democratic Sen. Raphael Warnock and Republican challenger Herschel Walker.

Ross Williams reports that most abortions are once again illegal in Georgia pending a state Supreme Court decision. A one-page ruling from the court Wednesday forced abortion providers to send patients home without treatment.

Dave Williams reports that Democrats in the Georgia House of Representatives will field a mix of veterans and new leaders in the minority party’s leadership team during the upcoming 2023-24 legislative term. The House Democratic Caucus reelected Rep. James Beverly Tuesday to serve as minority leader for the next two years.

Patricia Murphy, Greg Bluestein and Tia Mitchell report that Republican Senate hopeful Herschel Walker’s campaign has tried throughout the runoff to link U.S. Sen. Raphael Warnock to a troubled apartment complex partially owned by Ebenezer Baptist Church. So why did his top aides on Tuesday abruptly shift to a different line of attack, questioning whether one of Walker’s former high school football coaches was really his former high school football coach?