Trevor Williams reports that the U.S. is back in the game when it comes to financing the sales of American products around the world, the Georgia-born chair of the Export-Import Bank of the United States said Monday in Atlanta. EXIM Bank, as it’s colloquially known, was reauthorized by Congress in 2019 after being hamstrung in recent years by debates over the nature and extent of its work. 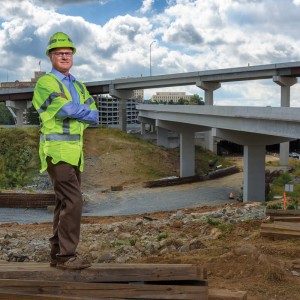 Georgians Get a Ticket to Ride

Tom Oder reports that whether it’s futuristic traffic lights that talk to cars, trendy statewide electric vehicle chargers or functional bus rapid transit (BRT) stations, the new Bipartisan Infrastructure Law will benefit Georgians for decades to come. The historic law that passed Congress last November – formally known as the Infrastructure Investment and Jobs Act – includes a once-in-a-generation national investment of $350 billion in highway programs from fiscal years 2022 through 2026 and provides for the largest dedicated bridge investment since the construction of the interstate highway system.

From grit to glitz? Planned mixed-use makeover could change Ponce

Zachary Hansen reports that Mike Greene is in charge of an effort to tear down several buildings along Ponce de Leon Avenue and the Beltline, blocks known for gritty bars and bumping nightclubs, to build a giant mixed-use project. The site, across the street from Ponce City Market, is home to businesses including The Local, The Bookhouse Pub, MJQ Concourse, Friends on Ponce and the recently shuttered restaurant 8ARM.

How Access to Affordable Housing Can Improve Health Outcomes for Georgians

Jason Bearden reports that the housing crisis in Georgia is significantly impacting low-income individuals and families who live in both urban and rural areas across our state. When Georgians struggle to find an affordable place to live, the likelihood of negative health outcomes increases.

Staff reports that a ward redistricting informational meeting will be held during the Albany City Commission’s Dec. 6 work session at 8:30 a.m. in Room 100 of the Government Center, located at 222 Pine Ave. The public is encouraged to participate in the discussions about the redistricting of the wards, as it could impact which city commissioner will be representing them and the ward they live in moving forward.

Peter Biello reports, on Election Day, Ruwa Romman made Georgia history: She became the first known Muslim woman elected to the Georgia House of Representatives, and she is also the first Palestinian American elected to any office in the state. She’ll be representing District 97, northwest of Atlanta.

Staff reports that the Georgia Department of Community Affairs recently announced that it will award $27,980,800 in 9% Housing Tax Credits to construct or preserve 28 affordable rental housing developments, including two in Albany. Once completed, the properties will provide below-market rents to families, seniors, and persons requiring supportive housing.

Abraham Kenmore reports that the court saga over Saturday voting in Georgia continues after several Republican organizations filed an appeal Tuesday afternoon to the Supreme Court of Georgia. Saturday early voting, which counties can opt into for Nov. 26, was initially blocked by the Secretary of State’s office due to a law preventing such voting within two days of a holiday.

T.A. DaFeo reports that Georgia is one of the largest markets without legalized sports betting, and the state could rival others that have already legalized such wagering. While the state does not have sports wagering, it does have a lottery.

Ross Williams reports that House Speaker David Ralston made his final journey to the Georgia Capitol Tuesday as throngs of lawmakers and staff gathered to say goodbye to the fixture in state government. “At times, he governed the House with an iron first, but also with a big soft heart,” said Gov. Brian Kemp. “That is why he was so respected and admired, and why his memory will continue to powerfully echo through this Capitol as it will through the north Georgia mountains that he loved so much.”

Tia Mitchell reports, on the day Lucy McBath won a third term in Congress, she was thinking most about the person who inspired her path in politics but who didn’t live to see it happen. “Jordan, I love you more than you could ever know,” McBath wrote in her election night message to supporters.