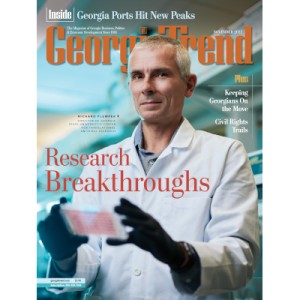 Kenna Simmons reports that COVID showed us just how vulnerable we are to emerging infectious diseases – not to mention health inequities and underlying conditions that made infected people sicker. But the pandemic also showed us how collaboration could fuel a quick and innovative response. That could be an area where Georgia leads in the future.

Kelly Yamanouchi reports that pilots at Delta Air Lines raised the stakes in labor contract talks by voting in favor of authorizing union leaders to call a strike in the event that negotiations come to a head. But the vote does not mean a strike is planned.

Despite legal battle, $5B Rivian electric vehicle plant still in progress for Georgia

T.A. DeFeo reports that work on electric vehicle manufacturer Rivian Automotive’s $5 billion plant will progress as planned despite an ongoing legal fight, officials confirmed to The Center Square. Site grading began in the early fall, and the judge’s ruling does not affect progress on development, Marie Gordon, a spokeswoman for the Georgia Department of Economic Development, told The Center Square.

Grant Blankenship reports that communities across a swath of central and west Georgia can look forward to high-speed fiber optic internet following the announcement of a $36 million loan from the U.S. Department of Agriculture. The loan to Roberta-based Public Service Telephone Company will help bring high-speed internet to rural Bibb, Crawford, Taylor and Marion counties and comes from billions of dollars set aside for broadband in the federal Infrastructure Law.

Gordon Jackson reports that a planned development called Camden Woods could become a destination for shoppers similar to a smaller version St. Johns Town Center in Florida, if everything goes as planned. Kingsland City Manager Lee Spell said the development will include 800 residential units and more than one million square feet of commercial property with big box stores, restaurants and smaller businesses.

Dyana Bagby reports that a plan to cap the Downtown Connector with park space has received a nearly $1.2 million boost in federal dollars. The funding is slated to be used for the preliminary design of the the project that some supporters call “the next big thing” for the city.

Ross Williams reports that Georgia’s film tax credit helped bring blockbuster productions like “Stranger Things,” “Ozark” and “Spiderman: No Way Home” to the state, along with an estimated $4.4 billion in spending during the 12 months ending June 30. But a new report from the Georgia Department of Audits and Accounts finds lingering concerns about the program’s transparency and rising cost to the state treasury.

Greg Bluestein reports that Gov. Brian Kemp maintains a solid lead over Democrat Stacey Abrams in the latest Atlanta Journal-Constitution poll, while the race between U.S. Sen. Raphael Warnock and Republican Herschel Walker remains a neck-and-neck contest that could be headed toward a runoff. Kemp leads Abrams 51% to 44% in the final AJC poll before the Nov. 8 election, with an additional 2% backing Libertarian Shane Hazel.