T.A. DeFeo reports that the feds sent millions to Georgia’s technical colleges to help workers and employers — especially those from “marginalized communities” — affected by the COVID-19 pandemic. The U.S. Department of Labor sent the $15 million Quality Jobs, Equity, Strategy, Training Disaster Recovery Grant to the Technical College System of Georgia. 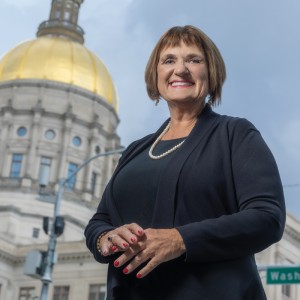 Patty Rasmussen reports, you don’t have to leave the community to have a job. Getting that message out is part of the workforce education mission in each of Georgia’s 159 counties, says Anna Chafin, CEO of the Development Authority of Bryan County.

Zachary Hansen reports that an Atlanta developer is trying to add some height to an aging Midtown building while also increasing the number of affordable rental units in a pricey area of the city. Tenth Street Ventures is pursuing plans to adaptively reuse a three-story building at 1450 West Peachtree Street, a property adjacent to the historic Winnwood Apartments.

Green Scene hosts “Last of the Right Whales” at Ritz

Larry Hobbs reports that the Atlantic Ocean off the coast of Georgia serves as the majestic right whales’ calving grounds — for now. Marine biologists have done the math. It is estimated that only 350 of these prodigious mammals remain. Right whales are dying faster than they can reproduce.

Carlton Fletcher reports that the city of Thomasville is set to begin a large improvement project on its wastewater treatment facility, improving the useful life of the facility by 20-plus years. The project will be completed in two phases with a combined cost of more than $8.5 million for the entire project.

Trevor Williams reports that the Atlanta Global Studies Center, a partnership between Georgia State University and Georgia Tech to foster innovation in international education, has received a federal grant for $1.05 million over the next four years. The grant renews the local presence of the center, which sits at the intersection of teaching languages, encouraging cultural competency and creating future global leaders, with a particular focus on K-12 education and sustainability.

The Inland Port has entered a new phase. Here’s what happens next in quest to get trucks off the roads

Brian Wellmeier reports that the Northeast Georgia Inland Port has entered the next phase of its approval process before construction at the 104-acre site can begin. The project is expected to provide a direct shipping corridor to and from Savannah’s harbor by way of a 324-mile freight rail service,

Chart Riggall reports that the Cobb Board of Elections voted Monday to toss out more than 1,300 voter registration challenges submitted weeks before Election Day. The board, citing a lack of probable cause behind the challenges, voted 4-1 to approve the dismissal. Pat Gartland, the Cobb Republican Party appointee, was the vote in opposition.

Jill Nolin reports that candidates for statewide office just reported their latest fundraising haul as they enter the homestretch of Georgia’s midterm election. Here’s a quick-and-dirty rundown on the size of these candidates’ war chests in Georgia’s marquee races. Early voting starts next Monday.

The Jolt: Marjorie Taylor Greene positioned for power in next Congress

Tia Mitchell, Patricia Murphy and Greg Bluestein report, at least two of Georgia’s eight Republicans in the U.S. House are lobbying for key leadership positions ahead of the midterm elections, in the event of the party return to the majority. U.S. Rep. Drew Ferguson is one of three campaigning to become whip, the fourth-highest ranking position in the Republican Conference.