Marisa Mecke reports, since since 1980, storm intensity has increased. More storms have been major hurricanes (Category 3 or above), and there’s been an increase in the proportion of storms that undergo rapid intensification. 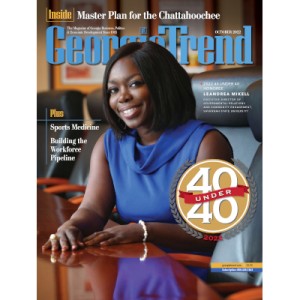 Staff reports, for the 26th year, Georgia Trend is celebrating 40 of the state’s brightest stars under the age of 40. As always, the individuals recognized here awe and inspire us. These outstanding young leaders make their homes throughout Georgia and represent the healthcare, legal, nonprofit and government sectors as well as large corporations and entrepreneurial startups.

Delta gets approval for Latin American joint venture with LATAM

Kelly Yamanouchi reports that Delta Air Lines has received federal regulatory approval of its long-planned joint venture with South American airline group LATAM. The antitrust immunity granted Friday by the U.S. Department of Transportation for the joint venture allows Atlanta-based Delta and Chile-based LATAM to start coordinating prices and flight schedules on flights between the U.S. and South America.

John Druckenmiller reports that the explosion of industrial and warehouse projects in Gordon County over the past 11 months requires two assets: A scorecard and a multidigit calculator. Thursday’s latest entry, the Gordon Commerce Center, makes seven mega campuses planned or underway on either side of I-75 with a combined value of $662.3 million.

Staff reports that Parker College of Business has announced the creation of the L. Inman Hodges, Sr. and Mary Sue Lovell Hodges Endowed Scholarship to support students majoring in hospitality management. A group of Mr. and Mrs. Hodges’s friends and family, led by their son Greg, established the scholarship to honor the memory of Statesboro business leader and restaurant pioneer, Inman Hodges.

Trevor Williams reports that Atlanta airport officials last week participated in four-day trade mission to India, a fast-growing economy that has long lacked a nonstop flight link to the world’s busiest airport despite heavy advocacy from a more-than-100,000-strong diaspora community.

T.A. DeFeo reports that Georgia officials touted a new ranking showing Georgia is the best state for business. But business leaders are warning that a shortage of “affordable housing” could hinder the state’s efforts to grow and attract businesses.

Fredrika Schouten reports, one morning in late August, Zach Manifold showed up at his job running the elections office in Gwinnett County, Georgia, to find eight boxes waiting, all filled with documents challenging the eligibility of tens of thousands of people to cast ballots. It was the physical manifestation of a law passed by the Republican-controlled state legislature in 2021, making it explicit that any voter in the state could challenge an unlimited number of fellow Georgians’ voter registrations.

Jill Nolin reports that as he spoke into the microphone, Carmine Vera posed a question that may be unusual at any other candidate forum: What is your position on the practice of paying people like him below minimum wage? Vera elevated an issue that is on the mind of many people with disabilities ahead of Georgia’s closely watched midterm elections.

Louis Jacobson reports, it’s a staple of campaign season: Either Republicans or Democrats claim that the opposite party intends to slash Medicare, the federal health insurance program for Americans age 65 and older. In this article, we’ll examine whether “Warnock voted with Biden to slash Medicare spending.”

Dave Williams reports that Democrats and Republicans don’t agree about much in election season. But Georgia’s congressional delegation joined forces Friday to push for a new mission for Dobbins Air Reserve Base in Cobb County. All 16 Georgians in the U.S. House and Senate – eight Republicans and six Democrats – signed a letter urging Air Force Secretary Frank Kendall to make Dobbins the future site of upgraded C-130J aircraft.

Patricia Murphy, Greg Bluestein and Tia Mitchell report that four years ago, Stacey Abrams ended her campaign for governor by starting a political organization that brought a far-ranging lawsuit alleging “gross mismanagement” and “unconstitutional flaws” in the 2018 elections. Four days ago, a federal judge’s decision to reject the legal challenge by Fair Fight Action marked a stinging setback to Abrams just as her rematch against Gov. Brian Kemp enters its final stretch.