Georgia Named No. 1 for Business for Unprecedented 9th Year

Staff reports that Governor Brian P. Kemp yesterday announced that Georgia has been named by Area Development magazine as the No. 1 state for business for the ninth consecutive year. No other state has earned this distinction for so many years. 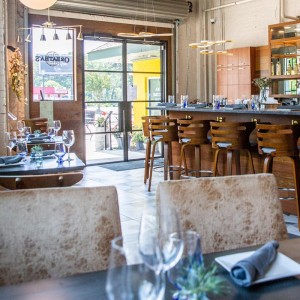 Casual, Modern and Welcoming: The interior of Oreatha’s at the Point
Photo: Contributed

Sucheta Rawal reports that driving through the formerly segregated Southwest Atlanta neighborhood of Cascade Heights evokes mixed emotions. While you see revitalized local businesses and a variety of architectural styles, you also consider this was the home of notables Congressman John Lewis and baseball Hall of Famer Hank Aaron, both of whom endured racism and fought for racial equality.

Georgia farmers scramble to save harvests as Hurricane Ian approaches

Emily Garcia and Drew Kann report that Tim Burch’s farm in Baker County, south of Albany, it’s not what he’s doing to prepare for the hurricane, it’s what he’s not doing. Burch, a peanut farmer, decided Monday morning to stop harvesting until after Hurricane Ian passes through.

T.A. DeFeo reports that the U.S. Department of the Treasury has awarded more than $125 million to Georgia-based institutions under programs that support community financial institutions to help small and minority-owned businesses. The 2021 Consolidated Appropriations Act established the Emergency Capital Investment Program.

Zoe Nicholson reports that the privately held Florida agribusiness U.S. Sugar will purchase Imperial Sugar, the Sugar Land, Texas-based company that owns and operates the Port Wentworth sugar refinery that’s served as a staple of Savannah since 1917 and was the site of a 2008 sugar dust explosion that killed more than a dozen people. The acquisition comes after a U.S. District Court judge in Delaware rejected the federal government’s antitrust lawsuit to stop the buyout from happening.

Dave Williams reports, for the fifth year in a row, Georgia public-school students outperformed their peers across the country on the SAT. Georgia’s class of 2022 recorded a mean score of 1052, 24 points higher than the 1028 national score but lower compared to the previous year, when Georgia students posted a mean score of 1077.

Lauren McDonald reports that organizations working to better the lives of youth and families in Glynn County were celebrated Wednesday and given funds to support their mission. Rich Product Corporation’s Consumer Brands Division and the Davis Love Foundation hosted a check presentation at Rich’s offices on St. Simons for five local organizations — the Brunswick-Golden Isles Chamber Foundation, STAR Foundation of Coastal Georgia, Girls on the Run, Glynn Visual Arts and CASA Glynn Inc.

On Okefenokee, DNR board looks for signal from feds

Mary Landers reports that the Department of Natural Resources Board met at the Okefenokee Tuesday, but didn’t offer its collective stance on a controversial plan to mine near the blackwater swamp. A resolution on the proposal might come later, Board Chair Bill Jones suggested after the meeting. Environmental Protection Division Deputy Director John Eunice did update the board on the permitting process for the titanium dioxide surface mine located about 3 miles from the swamp’s border.

John Bailey reports that Perry Greene, the husband of 14th District U.S. Rep. Marjorie Taylor Greene, filed for divorce in Floyd County Superior Court on Wednesday stating that the marriage is “irretrievably broken.” He motioned to have the divorce filed under seal.

Stanley Dunlap reports that the president of the Dominion Voting Systems defended the integrity of the company’s voting equipment during Wednesday’s Georgia State Election Board meeting where state officials attempted to shore up public confidence ahead of the Nov. 8 general election. The State Election Board meeting provided the board members a chance to discuss the ongoing criminal investigation surveillance video footage and other reports showing a group of people, with the help of several Coffee County election officials at the time, gaining unauthorized access to copy every component of the voting system following President Donald Trump’s defeat in the 2020 election.

Zachary Hansen and Drew Kann report that U.S. Sen. Raphael Warnock plans to introduce a bill Thursday to tweak requirements for electric vehicle tax credits in President Joe Biden’s signature climate and health law amid complaints from foreign automakers expanding in the U.S. that the law puts them at a competitive disadvantage.