T.A. DeFeo reports that unemployment is on the rise in Georgia. Peach State labor officials said all Regional Commissions saw an increase in unemployment rates in August. The state’s non-seasonally adjusted unemployment rate stood at 3.1% in August, up from 2.9% in July and down from 3.9% in August 2021. 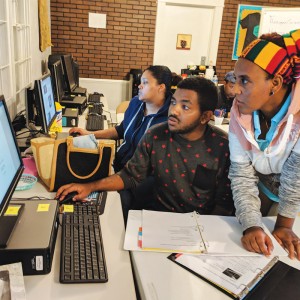 Candice Dyer reports that computer coders can write their ticket to the American dream of prosperity and success. Refcode, a Clarkston-based nonprofit, specializes in helping refugees and immigrants learn the ins and outs of coding and software engineering tools as a path to financial stability.

Michael E. Kanell reports that metro Atlanta economy added 10,500 jobs last month, growth that was good but fell short of the typical back-to-school burst of hiring, raising questions about whether the rising interest rates are finally starting to bite. The region last month saw hiring across a range of sectors, especially in government, education and office support staff, according to the state Department of Labor.

Joe Hotchkiss reports that the timetable to establish a proposed center to nurture new downtown Augusta businesses has shrunk from years to months after the plan won $2.35 million in federal funding to be released in early 2023. Small-business creation surged nationwide during the COVID-19 pandemic, according to the U.S. Bureau of Labor Statistics.

Staff reports that the William Root House Museum & Garden has been recognized by the American Alliance of Museums’ Center for the Future of Museums. CFM monitors cultural, technological, political and economic trends in the museum field.

Gordon Jackson reports that Cumberland Island National Seashore is preparing to commemorate its 50th anniversary with a year-long series of events beginning Oct. 1 at the St. Marys Seafood Festival. The kickoff event, in partnership with the city of St. Marys and Kiwanis Club, begins with a parade with a Cumberland Island theme starting at 10 a.m. at the seafood festival.

Medical marijuana ready for production and sale in Georgia

Tom Regan reports that low-potency THC medical marijuana oil will soon be available for sale in dispensaries in Georgia. This week, state regulators awarded licenses to two companies to grow, market and distribute medical marijuana, which has been shown to be effective in treating a wide variety of illnesses, including chronic pain and seizures. Advocates applauded the move.

Jill Nolin reports that by the time the residents of rural Brantley County realized a promising new project was a 100-acre landfill, it may have already been too late. Local officials say they were led to believe the project was a waste-to-energy plant.

Gordon Jackson reports that the Georgia Supreme Court will hear an appeal from Camden County seeking to invalidate the results of a referendum blocking the purchase of land intended as the launch site for a spaceport. The Oct. 6 hearing will be held at the Augusta-Richmond County Municipal Building.

Senate committee considers how to help veterans homes in Georgia

Rebecca Grapevine reports that a state Senate study committee focusing on veterans nursing homes in Georgia met Thursday to hear about problems Georgia veterans face and what the state can do to help. Though most veterans health-care services are spearheaded by the federal government’s Department of Veterans Affairs (VA), states also have an important role to play in helping veterans apply for and manage their benefits.

Maya T. Prabhu reports that when the U.S. Supreme Court overturned Roe v. Wade’s abortion protections, Georgia Attorney General Chris Carr submitted a letter to a federal appeals court asking the judges to allow a 2019 law restricting access to the procedure to take effect.  Soon after, state Sen. Jen Jordan, the Democrat who faces Carr in the November general election, said she would not spend taxpayer money to defend Georgia’s restrictive abortion law, which the court allowed to take effect in July.