Marisa Mecke reports that the more than 700 page tome that is the Inflation Reduction Act is filled with thousands of climate provisions. Many of those are financial incentives for a greener future looking to make their way to Georgia. 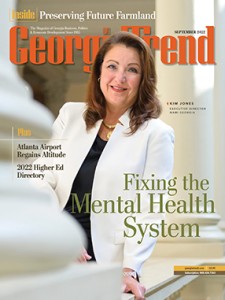 Kenna Simmons reports that in 2021, Georgia ranked 5th for the prevalence of mental illness and 51st in the access to mental healthcare, according to a report by Mental Health America, a nonprofit advocacy organization. That’s about to change. When the legislature passed HB 1013 in 2022 and Gov. Brian Kemp signed it into law as the Mental Health Parity Act, it was a rare and unifying moment that showed just what a bipartisan, bicameral approach could accomplish.

Michael E. Kanell reports that the economy is headed into recession, but it should be relatively brief and shallow, according to the director of the Georgia State Economic Forecasting Center. The Federal Reserve’s aggressive campaign to raise interest rates as a weapon against inflation is destined to slow growth, dampen consumer spending and spur layoffs in 2023, said Rajeev Dhawan, citing this week’s comments by Fed Chairman Jerome Powell.

Four burning questions on the future with Richmond Hill’s mayor

Latrice Williams reports that more people flock to Bryan County, those who call Richmond Hill home want to know how the city will manage growth. The Hyundai plant will open in just two and a half years, leaving officials with a short amount of time to sort out housing and amenities for current and future residents.

Emil Moffat reports that Lucy Sims says The Beautiful Restaurant, a staple in Atlanta’s Cascade Heights neighborhood, was forced to close its doors for nine months in the early days of the Covid-19 pandemic. Since re-opening, Sims says the eatery has faced staffing issues and the rising cost of food.

Donesha Aldredge reports that Wellstar Health System announced it plans to cease operations at Atlanta Medical Center in November. In a news release, Wellstar said the decision came after “pursuing every opportunity for an alternative path forward.”

Staff reports that Cobb County Chairwoman Lisa Cupid was appointed Monday to a leadership role in the National Association of Counties, a national organization of county officials. According to a press release from the county, Cupid was appointed as the organization’s economic development subcommittee chair under the umbrella of the Community, Economic and Workforce Development Steering Committee.

Study raises concerns about mining near the Okefenokee

Gordon Jackson reports that a study by a University of Georgia professor is raising concerns about potential impacts a proposed mining project near the Okefenokee National Wildlife Refuge could have on the world-famous swamp. C. Rhett Jackson, a professor of water resources at the university, concluded “the water under Trail Ridge will drop as a consequence” of mining near the swamp. Trail Ridge is a geological formation that is believed to retain the water in the Okefenokee.

Trevor Williams reports that the Inflation Reduction Act changed the eligibility for the $7,500 “clean-vehicle” tax credit, applying it only to EVs assembled in North America. That provision went into effect immediately when President Biden signed the bill into law Aug. 16, rendering ineligible 50 out of the 72 electric, hybrid and plug-in hybrid models sold in the U.S. (70 percent).

Stanley Dunlap reports that a plaintiff in a lawsuit challenging the state’s electronic voting system is being subpoenaed by Georgia Secretary of State Brad Raffensperger and the State Election Board for information that would include her communication with reporters. A subpoena filed Monday in U.S. District Court of Northern Georgia requests Marilyn Marks, executive director of Coalition for Good Governance, to provide every email, text message, details of conversation and any other documents about the unauthorized access of Coffee County’s voting system, including communication she’s had with the media.

T.A. DeFeo reports that Georgia officials have agreed to proceed with an agreement to settle a lawsuit over payment and processing of unemployment insurance benefits claims after a press release nearly derailed the accord. In late June, the Southern Poverty Law Center disseminated a news release announcing that U.S. District Judge J.P. Boulee approved the preliminary settlement in a lawsuit against the Georgia Department of Labor.

Dave Williams reports that two Georgia veterans lent their support this week to the use of the psychedelic drug psilocybin in treating post-traumatic stress disorder (PTSD). Following multiple combat deployments, Ethan Whitfield and Marcus Capone traveled outside of the U.S. for counseling and treatment of their PTSD with psilocybin after standard drugs failed to treat their severe depression.

Drew Kann reports that Georgia Power spent more than $500 million dollars on the two new nuclear reactors at Plant Vogtle in the first half of this year and it may take another $1 billion to complete the project, the company said Wednesday. Years behind schedule and billions over budget, the company said it was only presenting the expenditures to the Georgia Public Service Commission (PSC) for “review.”