America’s EV market: The race is on to meet consumer demand, and Hyundai is running fast

Latrice Williams reports that EVs have been around for 150 years, dating to a battery-powered horse carriage developed in the late-1800s. The first cars without an internal combustion engine didn’t become omnipresent on U.S. roadways until about a decade ago, when Nissan released the LEAF and Tesla the Model S in the U.S. 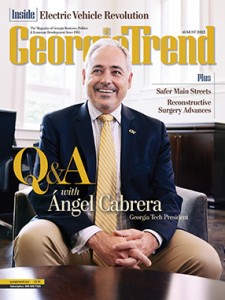 Susan Percy reports, when Ángel Cabrera arrived in Atlanta in 2019 as Georgia Tech’s 12th president, it was something of a homecoming for him. He was a Fulbright Scholar at Tech in the 1990s, earning an M.S. and a Ph.D. in psychology and cognitive science.

Noah Sheidlower reports that Delta Air Lines dedicated a Boeing 737-800 aircraft to the Atlanta Braves on Thursday to commemorate their 2021 World Series win. Dozens of Delta employees, from pilots to flight attendants, watched as the curtain lowered, revealing a Braves World Champions emblem near the aircraft’s nose.

Jessica Moore reports that Delta Air Lines will soon offer two new, never-before-operated direct flights from Atlanta’s Hartsfield-Jackson airport. Passengers will be able to add these nonstop flights to their bucket lists: Atlanta to Cape Town, South Africa, beginning Dec. 17 and Atlanta to Tel Aviv, Israel, starting next May, according to a release from Delta.

Martha Dalton reports that Gov. Brian Kemp announced Friday that the state will give K-12 public school teachers an extra $125 this year to spend on school supplies. According to federal data, 94 percent of educators spend their own money on classroom materials. The average amount is $478.

Mary Landers reports that the loggerhead sea turtle named Ike, age 2, made a short trip Friday to prepare him for a much longer journey he’ll undertake next year when he’s released into the Atlantic. Chantal Audran, acting director of the Tybee Island Marine Science Center, plucked Ike from his upstairs tank at the newly built beachfront museum and carried the 10-pounder downstairs to a 4,500-gallon fiberglass pool in the undercroft where Ike can more freely stretch his flippers.

Georgia’s Lottery Funds Preschools, Scholarships. But It May Not Be As Much As You Think

Beau Evans reports, as Georgians who may not typically play lottery games rush out to buy Mega Millions tickets for what is shaping up to be the third largest lottery jackpot ever, they take solace in the fact that lottery proceeds help fund local preschools and college scholarships. But few know that only 27% of the billions spent to play the lottery each year actually goes to education.

Terry Richards reports, when Michael Heard received an email claiming he and his wife, Heather, had won $20,000, he promptly trashed it. “I thought it was spam,” he said. It wasn’t.

Abraham Kenmore reports that solar jobs in the United States are still largely in installing panels, not making them, but Georgia Sen. Jon Ossoff hopes to expand the manufacturing side of things with his Solar Energy Manufacturing for America Act. The law, which passed the House in November but not the Senate, has made it into the new Inflation Reduction Act — a trimmed down spending bill that focusses on the economy and environmental issues. Sen. Joe Manchin of West Virginia, a long time hold out on Democratic spending proposals, this week reached a deal to support the bill with Senate Majority Leader Chuck Schumer.

Ross Williams reports, when Georgia lawmakers created the formula to pay for its public schools, President Ronald Reagan was celebrating the start of his second term, Purple Rain cassettes were flying off of the shelves, and children were monopolizing family TVs with their state-of-the-art Nintendo Entertainment Systems.

James Salzer reports that the state ethics commission on Monday will consider whether a nonprofit raised and spent millions of undisclosed dollars supporting Stacey Abrams’ 2018 gubernatorial campaign. The case is the biggest so far filed by the commission’s staff in what Abrams supporters have called a long-running “fishing expedition” engineered by a supporter of her 2022 rematch opponent, Gov. Brian Kemp.