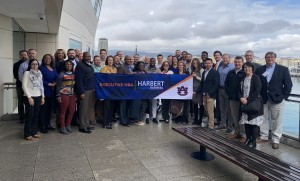 Julia Roberts reports that Auburn University’s Executive MBA program is designed for working professionals who want to continue their education without the commitment of a traditional, in-person, classroom setting. However, unlike an online MBA program, Auburn’s EMBA doesn’t sacrifice community.

Airport terminal for the rich and famous coming to Hartsfield-Jackson

Kelly Yamanouchi reports that private luxury airport terminal operator known for catering to Hollywood stars like Jessica Alba and Gabrielle Union is coming to Hartsfield-Jackson International to target commercial airline passengers willing to pay thousands for exclusive entry and exit from the world’s busiest airport. The company, called PS and formerly known as The Private Suite, has operated a private terminal at Los Angeles International Airport since 2017 that is known for catering to celebrities and other well-heeled customers.

‘Help wanted’ signs still prevalent even as May first-time jobless claims dropped 12% in Floyd, 11% in Bartow

John Druckenmiller reports that May was a see-saw month as the work force was up 900 jobs from a year earlier, to 41,900, and held steady vs. April. At the same time Floyd, Bartow and other Northwest Georgia counties saw the jobless rate inch up compared to April’s record lows. Compared to May of 2021, however, the unemployment rate was down in all counties.

Trevor Williams reports that Vanderlande Industries, the Dutch provider of conveyance systems and logistics process automation, has opened a new headquarters in Marietta that was two decades and nearly $60 million in the making. The company announced last August that it would relocate to a new building in Cobb County, where it has operated for more than two decades.

Richard Burkhart reports, on June 11, a brilliant lighting storm danced around the sky in the distance south of Savannah. But over St. Catherine’s Island, Mother Nature’s electric light display was more than a show. With very little rain and more than 100 strikes over the island, fire sparked tinder-dry fallen trees and underbrush.

Dave Williams reports that the Georgia Department of Education has awarded the first teacher recruitment tax credits to 69 teachers from across the state. The General Assembly voted unanimously last year to create the tax credit to incentivize teachers to ply their profession in rural and low-performing schools.

Micah Johnston and Caleb Slinkard reports that after years of legal wrangling, crews began moving two Confederate monuments from their downtown locations to a park along Riverside Drive Wednesday morning. Private money raised by the Community Foundation of Central Georgia will fund the removal of the two monuments, located on Cotton Avenue and Poplar Street, starting Wednesday morning.

Nick Sullivan reports that Georgia’s LGBTQ leaders are calling for Gov. Brian Kemp to reject an endorsement he received from an organization that believes their sexual and gender identities are sinful. Frontline Policy Action, a Christian lobbying group, endorsed Kemp in May as a proven supporter of its goals.

Dave Williams reports that a second minority utility partner in the Plant Vogtle nuclear expansion is mounting an effort to cap its costs to complete the project. The Municipal Electric Authority of Georgia (MEAG Power) has filed a lawsuit against Georgia Power in Fulton County Superior Court asserting its right to trigger a 2018 agreement freezing its capital costs in building two additional nuclear reactors at the plant south of Augusta.

Tia Mitchell reports that U.S. Rep. Marjorie Taylor Greene contacted the White House to request a pardon after the deadly riot on Jan. 6, 2021, according to a former White House aide. Greene’s office told The Atlanta Journal-Constitution last week that she did not request a pardon for any reason at any time, and criticized the media for spreading what a spokesman described as a “conspiracy theory.”