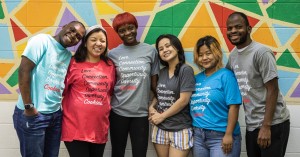 Refugees get a sweet start

Sucheta Rawal reports, if you frequent some of the farmers markets around Atlanta, you may have had a chance to taste the fresh baked cinnamon rolls and cheddar scallion scones from Just Bakery Atlanta (JBA). Since 2017, this unique bakery has been serving customers baked goods via delivery, pickups and at the Grant Park, Morningside, East Atlanta Village and Oakhurst farmers markets.

Drew Kann reports that Atlanta-based Novelis announced plans Wednesday to invest $2.5 billion to build a new aluminum recycling and production facility in Alabama. The plant will be built in Bay Minette, just north of Mobile, and is expected to create 1,000 new jobs, the company said in a release.

Atlanta inflation exceeds many other US metro areas, data shows

Doug Richards reports that Metro Atlanta’s inflation rate is one of the highest in the country, according to federal data released Wednesday. Although the price of gas is a smidge lower than it was a few weeks ago, it’s over $1 higher than it was a year ago.

Adam Van Brimmer reports that the search for what a Savannah economic development leader calls a “Super Bowl” economic development project for the Bryan County megasite is over. Georgia Gov. Brian Kemp is expected to announce a Kia Motors assembly plant on the 2,284-acre site late next week, according to people familiar with the matter but not authorized to comment publicly.

Ray Glier reports that inside the Apple store at Cumberland Mall, business is brisk on a Thursday afternoon. There is not a whiff of discontent among the retail workers judging by the demeanor of the staff. Still, June 2-4, Apple workers at the Cumberland Mall location will hold a public vote on whether to collectively bargain with the company under the banner of the Communications Workers of America.

John Druckenmiller reports, just as those Atrium signs are going up around Floyd holdings in town, there are more internal changes ahead for the hospital’s Northwest Georgia and Northeast Alabama. Those same sign companies might be needed at a few spots around Rome and Cartersville as well; another deal announced Wednesday means select urgent care centers will be getting new names.

Orlando Montoya reports that the city of Brunswick is installing tide control devices to prevent flooding during heavy rains. The move comes as tidal flooding is becoming more frequent on the coast as sea levels rise.

Alessandro Marazzi Sassoon reports that voting rights and the integrity of Georgia’s elections, not unexpectedly, have become central themes of this year’s race for secretary of state, with three Republicans challenging the incumbent and five Democrats hoping to flip one of the state’s most important offices.

Dave Williams reports that early voting in Georgia ahead of the May 24 primaries is breaking records, defying the historical trend of lower turnouts in non-presidential election years. Through Tuesday, 254,556 Georgians had taken advantage of the early voting period that began May 2 to cast their primary ballots, Secretary of State Brad Raffensperger reported Wednesday.

Eligibility of more than 13,000 voters challenged in Forsyth County

Shannon McCaffrey reports, with early voting already underway in the state’s May 24 primary, a Georgia man has challenged the eligibility of 13,609 voters in Forsyth County — about 8% of those registered to vote in the county. The challenge appears to be the largest so far under the state’s new elections law.