Staff reports that Governor Brian P. Kemp yesterday announced that Jack Link’s, the global leader in meat snacks, will create 800 jobs and invest $450 million as the company expands to Georgia with a new manufacturing facility in Perry. The announcement was made with company, state, and local officials at an event at the future home of Jack Link’s. 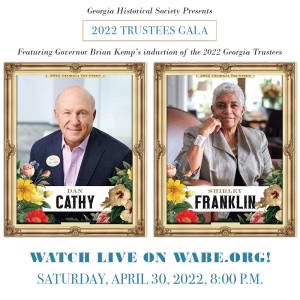 John Simpson reports, Georgia Historical Society and Georgia Trend cordially invite you to watch the 2022 Georgia Trustees Induction Ceremony live on April 30th, 2022 from the beautiful Savannah, Georgia. Ceremony starts at 8 P.M. The gala will be livestreamed from the WABE website.

Nancy Clanton reports that Canada geese might be flying north for the summer, but Canadian fast food chain Tim Hortons is headed south. The coffee and bakery franchise announced Tuesday that Atlanta businessman Abid Khutliwala is leading the chain’s expansion into Georgia with a plan to open 15 stores in Atlanta and Columbus in the next five years.

Nancy Guan reports that the paper industry in the Savannah area was in its heyday in the 20th century. The region’s abundance of pine trees provided a foundation for the paper and pulp manufacturers that eventually made their way to the southeast.

Georgia’s largest city is a decent incubator of businesses, but they often struggle to survive

Joe Hotchkiss reports that a company that began in Augusta in the 19th century plans to reopen a local sulfuric acid plant that will bring 30 new jobs to the area. Southern States Chemical Inc. announced its acquisition of the former Chemtrade facility on Columbia Nitrogen Drive in east Augusta, the company said in a news release Tuesday.

Stephannie Stokes reports that a U.S. Senate investigation alleges ongoing abuses in military housing at Fort Gordon in Augusta. Balfour Beatty Communities, one of the largest private providers of American military housing, already has admitted to a troubled history.

Solutions in the spotlight at 14th Congressional District debate

John Druckenmiller reports that Washington came to downtown Rome for nearly two hours as 9 of the 10 candidates for the 14th Congressional District talked jobs, voter rights, Social Security, critical national security concerns and one common target: incumbent Marjorie Taylor Greene, who was invited to the Monday event but didn’t attend.

Greg Bluestein reports that Herschel Walker is ignoring his Senate GOP rivals and focusing entirely on a November matchup against U.S. Sen. Raphael Warnock. An Atlanta Journal-Constitution poll indicates he has little reason to change course.