Trevor Williams reports that Ireland is deepening its commercial presence in the South as the the region’s economic heft grows, officials said in Atlanta in advance of St. Patrick’s Day. “Team Ireland,” as staff from the Consulate General of Ireland calls the constellation of government agencies and Ireland-focused nonprofits in Atlanta, has steadily grown in the decade since the country chose the city for its first consulate opened in the U.S. since the 1930s. 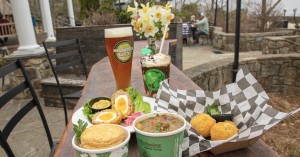 Sucheta Rawal reports, you’re Irish or just Irish for a day, celebrate St. Patrick’s Day by heading out to one of the pubs and restaurants around the state, or cook with your friends and family. Most Irish cuisine you’ll find today is not “traditionally Irish,” but rather mainstream as popularized by immigrants in the United States.

Michael E. Kanell reports, it may sound like bad news that metro Atlanta’s unemployment rate rose at the start of the year, but the reasons were positive. The official unemployment rate climbed to 3.3% in January from 2.8% in December, the state Department of Labor announced Thursday. But that’s because nearly 21,000 people joined the area’s labor force.

David Pendered reports that Chamblee’s housing consultant provided a snapshot Tuesday of housing costs in the city that make obvious the reason Chamblee intends to devise a strategy to induce a supply of dwellings at a range of prices. Whether residences are owned or rented, prices in Chamblee are up from 80 percent to 100 percent in the past decade for both houses and condos, Kyle Talente, managing principal with RKG, told the Chamblee City Council at its Tuesday night meeting.

Georgia’s crypto mining industry is booming. Here’s how it could grow even faster.

Erin Schilling reports that Mawson Infrastructure Group’s largest cryptocurrency mining operation is tucked into a forest near a 6,000-person South Georgia town. It was the perfect site for the Australian-based company (NASDAQ: MIGI).

John Druckenmiller reports that Rome, Bartow and the rest of Northwest Georgia received another mixed labor report to start 2022 from the Georgia Department of Labor. Despite “help wanted” signs plastering billboards around town as well as displays in front of retailers and restaurants, Floyd County did see an increase in the local work force while Bartow and the region saw all-time highs in their respective work forces.

Asia Ashley reports that Georgia legislators worked into the night Tuesday to advance bills — including a few controversial measures — from their chambers to meet the Crossover Day deadline. Ahead of the Tuesday deadline, several key bills had already been approved in the respective chambers, including bills banning the teaching of certain race-related topics in schools, prohibiting transgender children from playing school sports on a team matching their gender identity and prohibiting the mailing of abortion pills.

Taylor Reimann reports that the Georgia House passed a resolution Tuesday that would allow voters to decide in November whether to set state legislators’ pay at 60% of the median household income. Instead of a fixed salary that must be adjusted through legislation, this constitutional amendment would create a salary that adjusts itself outside of lawmakers’ control.

Ross Williams reports that a plan to temporarily suspend Georgia’s motor fuel tax in the wake of sky-high gasoline prices passed the state Senate unanimously Thursday. The House unanimously passed the bill last week. Gov. Brian Kemp has given the measure his full support and is all but certain to sign it.

GOP lawmakers are gunning for permitless carry in Georgia. How many people would it affect?

Riley Bunch reports, on a sunny afternoon, in the shadow of the Georgia Capitol, Gov. Brian Kemp stood among a small group of gun rights advocates, many armed. He proclaimed the ongoing legislative session as historic on many fronts, but especially for Second Amendment rights.

T.A. DeFeo reports that proponents say legislation approved by the Georgia House would streamline the regulatory process for food trucks and could save business owners thousands of dollars a year. House Bill 1443 effectively would create a statewide permitting process for food trucks. Under the legislation, food truck operators could use the permit they obtain in the county they operate in other counties.

Dave Williams reports that most Georgians support the United States developing its own domestic sources of energy rather than relying on other regions of the world, according to a poll released Thursday. The online survey of a representative cross-section of registered voters conducted March 1-6 by the polling firm Morning Consult found 90% in favor of the U.S. stepping up energy production.

Greg Bluestein reports that Gov. Brian Kemp’s latest financial report reveals his wealth has grown by more than $3 million since he took office in 2019, thanks partly to a string of real estate holdings and business investments that appreciated in value. The Republican filed paperwork Thursday that showed a net worth of roughly $8.6 million that included more than $4.6 million in various properties and a roughly $420,000 stake in a stone supply firm.