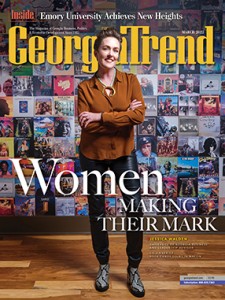 Mary Ann DeMuth reports, whether they are business owners or executives in well-established and respected firms, women in Georgia are demonstrating their unique leadership qualifications. As they’re heading a wide variety of businesses, they’re also mentoring the next generation, promoting diversity in executive ranks and the pursuit of innovation, harnessing social media for good, using their influence for positive change and encouraging entrepreneurialism.

Kelly Yamanouchi reports that UPS and FedEx have halted shipments to Russia and Ukraine after the Russian invasion of Ukraine. Sandy Springs-based UPS said it has suspended all shipping to, from and within Ukraine, and all international shipments to destinations in Russia, until further notice.

Dave Huddleston reports that life is coming to the gulch. The big hole in downtown Atlanta is being converted into what will be known as Centennial Yards. In the next couple of months, you will start to see some major developments happening there.

Andrew Shearer reports that Athens restaurateur Hugh Acheson tweeted on Feb. 25 that he and his travel chef, Sam Herndon, would be traveling to Iași, Romania, “to feed Ukrainians in need.” The trip is part of World Central Kitchen‘s Chefs For Ukraine initiative, which supports families fleeing Ukraine and residents still remaining in the country.

Ken McCarthy reports that Georgia’s Own Credit Union in Atlanta has agreed to buy Vinings Bank in Smyrna, Georgia, the first credit union deal to acquire a bank this year. It would be the second bank acquisition for the $3.4 billion-asset, which bought State Bank of Georgia in Fayetteville in 2018.

Sarah Kallis reports that the Georgia Senate Education and Youth Committee heard more than an hour of public comment on a controversial education bill Monday.Senate Bill 377, sponsored by  Sen. Bo Hatchett (R-Cornelia), had its third hearing where it met criticism from educators and students.

Taylor Cooper reports that local banking executive Mike Hodges announced his campaign for the Third District state Senate seat Sunday. The post is currently held by Republican Sheila McNeill, who earlier this year said she would not be seeking reelection due to her husband’s health.

Dave Williams reports that Georgia Commissioner of Labor Mark Butler announced Monday he will not seek reelection to a fourth term. Butler, whose agency has faced huge obstacles processing the deluge of unemployment claims filed during the pandemic, informed employees in a memo that he is stepping down to focus on his wife’s battle with cancer.