Staff reports that Port of Savannah handled a record 479,700 twenty-foot equivalent container units of cargo in January, an increase of 4 percent over the same month a year ago, a month in which cargo volumes had expanded by 22 percent. The Port of Savannah has now set monthly records for the past 18 months. 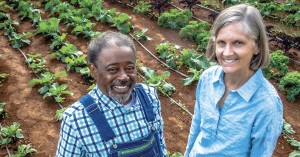 Kenna Simmons reports that urban agriculture is moving into the spotlight with the creation of a new advisory committee at the U.S. Department of Agriculture (USDA) and Georgia will have an experienced voice at the table. Bobby Wilson, the CEO and co-founder of Metro Atlanta Urban Farm (MAUF), joins 11 other members who were recently appointed the inaugural USDA Secretary’s Advisory Committee for Urban Agriculture.

Maria Saporta reports that as it opens its North American headquarters today adjacent to Truist Park, TK Elevator envisions playing an important role in the urbanization of the world. On electronic messaging boards, TK Elevator highlights the fact that 70 percent of the world’s population will live in cities by 2050 (it’s now just over 50 percent).

Trevor Williams reports that the Georgia Department of Economic Development’s offices abroad have fielded a new slate of trade leads, providing opportunities for companies in the state to fulfill the agricultural and aerospace needs of foreign customers. In Brazil, companies are asking for suppliers to fill disparate demands, from 300 tons of yeast for mass-manufactured dough to two Airbus A330-200 model aircraft.

Curt Yeomans reports that a state lawmaker from Cobb County is preparing legislation that will protect employees of city and county governments in Georgia if they blow the whistle on sexual harassment — and a major impetus behind the bill is the recent investigation into the Lawrenceville Police Department.

Ross Williams reports that a bill that would bar transgender athletes from playing on girls’ sports teams passed a Senate committee Wednesday and could head to the Senate for a full vote. If it passes both chambers and is signed by Gov. Brian Kemp, students at public schools and at private schools with teams that compete against public schools will only be allowed to play on the team of the gender on their birth certificate.

Nyamekye Daniel reports that a Georgia education committee has advanced a bill prohibiting K-12 schools from promoting certain ideologies about racism and discrimination. The House Subcommittee on Academic Innovation approved House Bill 1084 on Wednesday. The measure, introduced by Rep. Will Wade R-Dawsonville, bans nine “divisive” concepts from being taught in schools.

Taylor Reimann reports that Lt. Gov. Geoff Duncan presided over his last scheduled joint session of the House and the Senate Tuesday for the State of the Judiciary address. He announced last year that he will not be running for reelection.

Susan Capelouto reports that Dr. Kathleen Toomey warned the State Board of Public Health this week that the current COVID-19 controversies around schools have spilled over into childhood immunizations. She’s referring to state Senate Bill 345, which would prohibit schools from requiring any vaccinations.

Richard Elliot reports that some Georgia lawmakers want to make it illegal to send abortion pills through the mail or dispense them at state colleges and universities.They say it should only be prescribed after visiting a doctor. Critics say lawmakers shouldn’t be telling doctors how to treat their patients.

Dave Williams reports that the General Assembly is weighing in on a controversial proposal to mine titanium near the Okefenokee Swamp. A bipartisan bill introduced in the Georgia House of Representatives would prohibit the state Environmental Protection Division from issuing permits for surface mining along Trail Ridge between the St. Marys and Satilla rivers.

Greg Bluestein reports, for the first time in its history, the Republican Governors Association is financing a TV ad during a party primary to support an incumbent facing a GOP challenger. The group unveiled a pro-Kemp ad Wednesday – and put more than $500,000 behind it.