Alan Cole reports, it was not so long ago Kirby Smart would have been the one making the crucial interception. Before he was the head coach for the Georgia Bulldogs, he patrolled the secondary at Sanford Stadium from his defensive back position and grabbed 13 interceptions in his college career before signing with the Indianapolis Colts as an undrafted free agent. 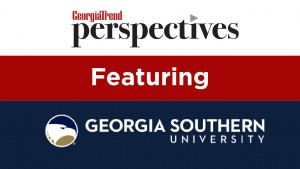 Julia Roberts reports, our Perspectives series this month features Dr. Kyle Marrero, President of Georgia Southern University. With more than 27,000 students on three campuses, Georgia Southern has a focus on graduating students ready to power, serve, and transform their communities, the region, and beyond. Learn a few facts about them in this short video!

Drew Kann reports, on Alex Cornelius’ nearly 300-acre farm west of Waycross, Georgia, confused blueberry bushes have already started blooming, about two to three weeks earlier than normal. Other varieties, which require longer exposure to cool temperatures, have not received the cold hours they need for a productive crop.

Andy Miller reports that Kaiser Permanente has appointed Pamela Shipley as the new regional president for the organization’s Georgia operation. Shipley comes from Sharecare, a virtual health IT company based in Atlanta, where she was chief operating officer.

Taylor Reimann reports that the University of Georgia’s fight song blared through the Georgia House chamber in support of the school’s football team on the first day of the legislative session Monday morning. Lawmakers expressed their enthusiasm by wearing red and black clothing, waving red streamers and clapping in anticipation of the night’s College Football Playoff game against Alabama.

Riley Bunch reports that under pressure to deliver on promises of voting rights legislation, President Joe Biden and Vice President Kamala Harris will visit Atlanta on Tuesday. The nation’s top two leaders will speak at Atlanta University Center Consortium on the grounds of Clark Atlanta University and Morehouse College, according to the White House.

Mary Landers reports that a hearing in Camden County Superior Court Tuesday will determine if Camden County can move forward with its purchase of land for its planned spaceport or if it has to temporarily delay the purchase until the probate court evaluates a request to let voters decide the matter.

Stanley Dunlap reports that as Georgia legislators prepare to resume the public’s business inside the Gold Dome today, the fireworks over absentee ballots and a host of other voting rules are expected to erupt again after 2021’s controversial GOP overhaul of the state’s election laws.

Dave Williams reports that Georgia’s hefty budget surplus is about to pay off for state employees. Gov. Brian Kemp will include a $5,000 raise for most state workers in the fiscal 2022 mid-year budget proposal he will release later this week.

The Jolt: Stacey Abrams won’t be with Joe Biden and Kamala Harris in Atlanta today

Patricia Murphy, Greg Bluestein and Tia Mitchell report that Stacey Abrams welcomed today’s visit from President Joe Biden and Vice President Kamala Harris on social media, but she won’t be with them when they speak in Atlanta today. The Democratic candidate for governor cited a scheduling conflict for not being there.