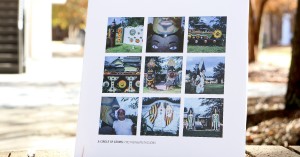 Mary Ann DeMuth reports that Columbus State University (CSU), which owns the Buena Vista-based Pasaquan outdoor art compound, recently collaborated on a vinyl album that celebrates the life of internationally renowned folk artist Eddie Owens Martin, aka St. EOM. The collaborative project between Pasaquan and CSU’s Schwob School of Music was more than a year in the making and features eight tracks, most of which are original compositions about or inspired by the site, which is on the National Register of Historic Places.

Christopher Quinn reports, when Remington Arms announced in November its decision to move its global headquarters to west Georgia, bringing 850 jobs, it became the latest in a string of gun-makers relocating to the Peach State. Georgia has quietly become one of the country’s top 10 states for gun manufacturing, according to data from the National Shooting Sports Foundation.

Nick Wooten reports that Columbus lawmakers will be back under the Georgias capitol’s gold dome Monday for the start of the 2022 legislative session. Healthcare, gambling, education and mental health are among the major issues legislators hope to address during the session.

Billy Hobbs reports, Ken Vance has announced his intentions to seek office as a state representative. Vance, who was the longest consecutively serving member on Milledgeville City Council with 28 years of service to the residents of District 4, recently talked with The Union-Recorder about his latest aspiration.

State superintendent expects students back in class, teacher raises in 2022

Ross Williams reports, despite some large Georgia school systems implementing an online start to the semester this week, the state’s public educational system is poised for a successful and mostly in-person semester, state Superintendent Richard Woods said Friday. “It goes without saying that the last two years have been shaped by the pandemic, our recovery is ongoing,” Woods said.

Diane Wagner reports that local lawmakers are heading back to Atlanta for the 40-day Georgia General Assembly session that starts Monday. It’s the final year of the two-year session, so all legislation that didn’t pass last year is still alive for potential action.

Georgia counties will push for expansion of sales tax

Nyamekye Daniel reports that Georgia counties are asking lawmakers to expand the state sales tax during the 2022 legislative session to reduce their dependency on property taxes. The ACCG, an advocacy group for Georgia’s counties, is calling on the General Assembly to tax Georgians for digital products such as videos and music, often purchased through a streaming service.

Zoe Nicholson reports that Sen. Jon Ossoff, D-Georgia, has called on the Environmental Protection Agency and U.S. Army Corps of Engineers to halt a proposed titanium mine from operating near the Okefenokee Wildlife Refuge in Southeast Georgia. “The Twin Pines proposed mine threatens the environmental, cultural, and economic integrity of the Okefenokee,” Ossoff’s Dec. 20 letter to the Corps reads.

Asia Ashley reports, while budgeting for public safety and mental health initiatives are Georgia House Speaker David Ralston’s top priories this legislative session, public education, gun rights and tax relief are also on the agenda of Georgia legislators for the 2022 session. The number of homicides in Atlanta peaked to 158 in 2021 and youth suicide rates are at an all-time high, Ralston said.

Dave Williams reports that Republican gubernatorial candidate David Perdue is challenging a new state law that gives incumbents an advantage in fundraising. The legislation, which the Republican-controlled General Assembly passed last March virtually along party lines, allows Georgia’s governor, lieutenant governor, the general-election nominees opposing those two statewide incumbents and the heads of the majority and minority caucuses in the legislature to create leadership committees that can raise unlimited campaign contributions.

Greg Bluestein reports that Democrat Charlie Bailey switched from the race for attorney general to the contest for lieutenant governor with a coterie of influential supporters who hope to make him the front-runner in the wide-open election for Georgia’s No. 2 job. The ex-prosecutor told The Atlanta Journal-Constitution he was convinced by senior Democrats that making the leap to the lieutenant governor’s race would give him a better chance to advocate for his priorities – and a better shot at victory.