Stanley Dunlap reports that the signature January events that usually mark the start of a new Georgia legislative session are set to return in 2022 with a mixture of in-person and virtual options. This year, state leaders will resume hobnobbing over a smorgasbord of barbecue and other Southern fare to raise money for the Georgia Food Bank Association as the Wild Hog Supper returns. 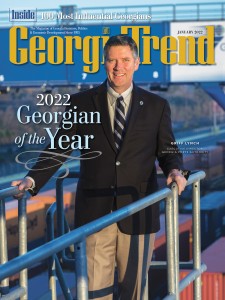 Mary Ann DeMuth reports, growing up on Long Island, N.Y., sea water was in Griff Lynch’s veins. From the time he was a kid, he dreamed of being a tug boat captain in New York Harbor. There was just one problem. While studying at the state Maritime College, he discovered that he got seasick.

Matt Bruce reports that for air travelers, the new year picked up where the old left off – with lots of frustration. At Hartsfield-Jackson International Airport, 93 flights had been canceled and another 109 delayed by midday Saturday, according to tracking service FlightAware.

Ben Anderson reports, as the pandemic picked up steam in May 202, King’s Hawaiian was preparing for a “deep recession,” especially during the holidays. But in the time since, the company has added a fourth production line at its Oakwood facility and business has remained strong.

Asia Ashley reports that educational groups across the country are joining forces to increase the number of teachers of color by 1 million by 2030. Black Teacher Collaborative in Georgia received $750,000 from Chan Zuckerberg Initiative to develop a research plan that evaluates teaching practices that foster racially affirming learning environments for Black children.

Jessica Brown reports that Atlanta Mayor-elect Andre Dickens will be sworn in Monday at 1 p.m. at Bobby Dodd Stadium. “In an effort to advance sustainability and technological efforts, there will not be a physical Inaugural Program. It will be digital-only and will be accessible on MovingATLForward.com,” a release stated.

Nyamekye Daniel reports that three Georgia laws go into effect at the start of the new year that impact juvenile justice, sales tax on vehicles and medical transactions. House Bill 63 changes the way the fair market value of a vehicle is estimated.

Stephen Fowler reports, it did not take long after the proverbial ink to dry before lawsuits were filed against Georgia’s new political redistricting maps covering the state House, state Senate and U.S. House district boundaries. Gov. Brian Kemp quietly signed the new maps into law Thursday, Dec. 30, 2021, after a special legislative session that ended in November, codifying Republican dominance in a state that has seen a rapid political and demographic shift toward Democrats.

Adam Liptak reports that the U.S. Supreme Court will soon decide whether to hear a case which requires that defendants in capital cases who are intellectually disabled prove it “beyond a reasonable doubt” — a phrase that was inserted in error. The Georgia law at issue in the case, unique in the nation.

Dave Williams reports, heading into the 2022 General Assembly session, a push is on to raise the annual cap on Georgia’s rural hospital tax credit from $60 million to $100 million. In 2021, the program reached that cap by August, giving rural lawmakers and advocates for rural hospitals reason to believe more money will be needed in the coming year.

Ty Tagami reports, three years ago, on his first day of eighth grade, James Liming wrote his new name on a school form. During his first two years at DeSana Middle School in Forsyth County, everyone had known him by the name that his parents had given him at birth. A girl’s name.