Tom Spigolon reports that SKC Inc. will create more than 400 new jobs as it works with several business partners to manufacture a part for semiconductor chips in a new facility on its Covington site. The company will invest more than $473 million in this “unprecedented venture” to create glass-based substrates for the chips in Newton County, the governor’s office announced today. 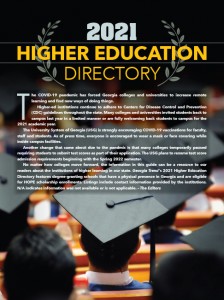 Got questions about higher education in Georgia? Georgia Trend’s 2021 Higher Education Directory has the answers, featuring degree-granting schools that have a physical presence in Georgia and are eligible for HOPE scholarship enrollments.

Christopher Quinn reports that a Lawrenceville firm’s software that provides nearly 7,000 hotels across the U.S. and abroad with accounting and management services reportedly has been down for nine days, leaving hotels struggling to do things such as pay employees or service providers. The shutdown of M3′s software is not affecting reservations or guest services, according to a hotelier who uses the system and an industry insider.

Staff reports that Governor Brian P. Kemp on Thursday announced MBS Equipment Company (MBSE) is opening its new east coast headquarters in Georgia. MBSE is the largest studio-based equipment company in the world for film, television, and events. The headquarters, based in Fayette County at Trilith Studios, will span 100,000 square feet, making it the company’s largest global hub.

Merritt Melancon reports, we’re witnessing a perfect storm of disruptions to the very complex, but generally reliable, system that connects manufacturers to customers, said supply chain expert Marty Parker, a lecturer in the University of Georgia’s Terry College of Business department of management. Parker said logistics experts are learning valuable lessons about how to strengthen the system in the future.

Amy Wenk reports that a team is envisioning how a 200-acre district along Peachtree Road could become Brookhaven’s walkable center. New projects are bringing community gathering spaces around Perimeter Mall and the Dunwoody Village. Sandy Springs is studying how to expand its town center to bring more restaurants and possibly a hotel.

Tom Corwin reports that the future hospital in Columbia County will benefit not only from insights gleaned from designing facilities across the country but also from lessons learned during the pandemic and the need for flexibility and accommodating telehealth, the newly hired architects said. For one of them, the project is also personal.

Ross Williams reports that fewer Georgians filed initial unemployment insurance claims last month than in the weeks leading up to the pandemic last year, and the state’s unemployment rate hit 3.2%, a 20-year low. Those are two welcome signs of economic recovery after record-breaking layoffs sent workers home across the state, but celebrations of those numbers should be tempered by the large number of Georgians quitting their jobs and not seeking new employment.

Staff reports that Governor Brian P. Kemp on Thursday announced that he will dedicate up to $110 million to combat violent crime and help support the Georgia judiciary’s recovery from COVID-19. “No one benefits when there is a delay in justice,” said Governor Brian Kemp.

Kelly Loeffler wants Republicans to vote. Is she the right person to ask them?

Riley Bunch reports, at 9 a.m. on a recent Saturday in Gainesville, Kelly Loeffler made her way from table to table in a local café. Wearing a pink and green plaid shirt, dark blue jeans and distressed brown work boots, she greeted members of the Republican Women of Hall County and stressed the importance that they turned up to the early morning event.

Greg Bluestein reports, it was an unconventional setting for the most scathing attacks yet in Georgia’s U.S. Senate race. Shortly after a tour of nonprofit center for domestic violence victims, Agriculture Secretary Gary Black sat at the head of a long conference table Thursday and proceeded to eviscerate the leading Republican contender in the contest.