Jill Nolin reports that today, there are about 24,400 electric vehicles in Georgia, with about one-third of them found in Fulton County, according to Cox Automotive’s analysis of IHS Polk data. Other top counties — DeKalb, Cobb, Gwinnett and Forsyth — are also in metro Atlanta. 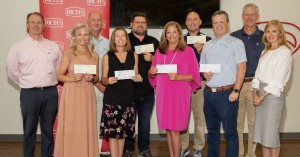 Mary Ann DeMuth reports, in a joint partnership, the Rich’s Consumer Brands Charitable Fund and the Davis Love Foundation have awarded $60,000 in donations to organizations serving youth and families in South Georgia. Grants of $10,000 each were given.

Tia Mitchell reports that Black farmers in Georgia had already begun completing paperwork to qualify a new debt relief program for “socially disadvantaged” producers when a federal judge ruled the program was potentially unconstitutional and paused it indefinitely. Tammy Harris, an advocate for farmers who also operates an agritourism business in Heard County, said the $4 billion loan forgiveness program was supposed to address long-standing complaints by farmers of color about unequal access to U.S. Department of Agriculture program.

Emil Moffat reports that Lee Sentell says the idea for “The Official United States Civil Rights Trail” came from a conversation he had years ago with Dr. Martin Luther King Jr.’s daughter Bernice. “She said people don’t know the story,” said Sentell. “If you don’t know the story, then you don’t care. And so that’s what led me to this idea of ‘let’s help tell the story.’

Olivia Morley reports, with a potential open container test period coming in August, the Georgia’s Rome Office of Tourism Board said Wednesday it’s a step in the right direction to help draw people to Rome. During their board meeting, City Commissioner Jamie Doss said he and the rest of the commission want to hear from the public on the trial period and a potential ordinance.

Shiann Sivell reports, after a hectic year in 2020, LaGrange’s tourism industry is getting back on track. Kathy Tilley, the president and CEO of Visit LaGrange, said during the LaGrange City Council’s work session Tuesday that the city’s tourism industry is picking up, especially in its hotel and motel industry.

Trevor Williams reports, while keeping an eye on U.S. policy changes including updated “Buy American” rules, potential tax changes and a stimulus-led economic recovery, many Swiss investors — including some in Georgia — still see opportunities outweighing risks in the world’s largest economy. Switzerland, though a small country by population, is the sixth largest foreign investor nation in the U.S., with Swiss-owned firms accounting for more than half a million jobs across the country.

Dave Williams reports that the University System of Georgia Board of Regents Wednesday named state government veteran Teresa MacCartney acting chancellor of the system while the board continues its search for a permanent successor to the retiring Steve Wrigley. MacCartney, who will take over the role July 1, has served as the university system’s executive vice chancellor for administration since 2019, where she oversees departments including cybersecurity, human resources, legal affairs, economic development and real estate and facilities.

Andrea Jones reports that Georgia State’s National Institute for Student Success (NISS) is moving towards its next implementation phase thanks to a transformational $2 million gift from The Kresge Foundation, a deeply committed supporter of student success initiatives at Georgia State and universities around the country.

Nyamekye Daniel reports that the Southern Poverty Law Center (SPLC) and an Atlanta-based law firm have sued the Georgia Department of Labor over unemployment benefits delays. They claim the state agency did not follow federal law and process jobless claims in a timely manner.

Patricia Murphy, Greg Bluestein and Tia Mitchell report, is it wishful thinking for the pro-Donald Trump crowd or a sign of what’s to come? Corey Lewandowski, the former Trump campaign manager, hopped on The John Fredericks Show to tease the idea of a serious Republican contender entering the race against Gov. Brian Kemp.