Trevor Williams reports, Brazilian tech entrepreneur Raphael de Albuquerque was looking for an office in the U.S., metro Atlanta wasn’t initially on the radar. New York, Silicon Valley and other places topped the list based on reputation alone. 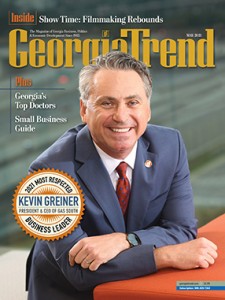 Susan Percy reports that Kevin Greiner describes Gas South’s December 2020 purchase of Florida-based Infinite Energy as “a big challenge and a wonderful opportunity.” A challenge because it increases revenue and adds customers; an opportunity for the same reasons, with the prospect of growing the company’s capabilities and influence.

Matt Kempner reports that Emily Weddington put some distance between herself and her West Midtown office in Atlanta during the pandemic. It’s now, give or take, 240 miles door to door.

Edgar Treiguts reports that the president and CEO of the Georgia Restaurant Association, Karen Bremer, is talking about cash from the Restaurant Revitalization Fund. On Monday, businesses in the food industry can begin the process of applying to the U.S. Small Business Administration for the grants.

Bryce Etheridge reports that South Georgia Medical Center’s Berrien campus may be getting a new emergency room. Ronnie Dean, SGMC chief executive officer, and the Valdosta-Lowndes Hospital Authority announced the study – and replacement in general – as something that’s been talked about for years.

Mary Ann DeMuth reports, on May 19, the Gwinnett Chamber of Commerce will hold its inaugural Diversity, Equity and Inclusion (DE&I) Summit at Infinite Energy Forum. Presented by Georgia Power, the summit will offer business professionals the opportunity to talk and learn about DE&I as growth drivers. Interested participants can register to attend in-person or online. Sponsorship opportunities are also available.

Federal, state officials act to get lead out of school water

Robin Kemp reports, how safe is your child’s drinking water at school? Georgia schools earned an “F” when it comes to clean drinking water for its students and teachers. The good news: Help is on the way. On Thursday, the Senate voted 89-2 to pass S.914, the “Drinking Water and Wastewater Infrastructure Act,” a $35 billion proposal that included a push from Sen. Jon Ossoff for $200 million “to repair lead pipes in schools and $100 million for general remediation of lead pipes in communities across Georgia and the country.”

Stephen Fowler, David Armstrong and Isaiah Poritz report, while new U.S. Census data shows Georgia added more than a million people over the last decade, an even larger change in registered voters — and who they vote for — will be key considerations when lawmakers begin assigning residents into new voting districts this fall. Population figures released this week provide a starting point for determining how Georgia’s 10,711,908 people will be split up into legislative and Congressional districts of equal proportions.

LaShawn Hudson reports that Congresswoman Nikema Williams says when the Federal Aid Highway Act of 1956 was enacted, Black neighborhoods and Black business areas throughout the country were intentionally targeted — driving the generational, racial, wealth gap and segregation. “We have to correct some of the inequities that were created by decisions of the federal government,” said Williams, who represents Georgia’s 5th Congressional District.

Ariana Figueroa reports that the arrival of U.S. Sen. Raphael Warnock in Congress earlier this year coincided with an overdue recognition of the historic discrimination inflicted on Black farmers by the U.S. Department of Agriculture. The farmers’ plight has emerged as a major priority for Warnock, a Georgia Democrat whose victory in a January special election runoff handed his party a slim majority in the Senate for the first time in a decade.

Georgia Democrats are staffing up as a pivotal 2022 election looms

Greg Bluestein reports, with the last supercharged election hardly in the rearview mirror, Georgia Democrats just wrapped up a hiring spree to prepare for a high-stakes 2022 campaign. The Democratic Party of Georgia on Monday announced it hired seven new full-time positions for a slate of political and organizational posts around the state