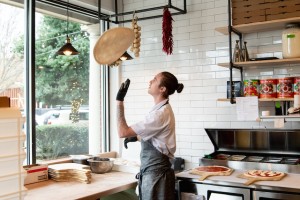 Sucheta Rawal reports, lunch hour is no longer a brief escape from the office that we once looked forward to. Instead of catching up with colleagues at a delectable restaurant, now we juggle between video calls, checking in on the kids, taking the dog out and grabbing a quick nibble.

Michael E. Kanell reports that the Adecco Group, a huge global staffing company, is planning to move its North American headquarters from Jacksonville to Atlanta. The company, which has a number of metro Atlanta offices that offer staffing services, is based in Zurich, Switzerland.

Rome’s tourism industry down a third in 2020

Doug Walker reports that the economic impact of the COVID-19 pandemic on tourism was a 34% reduction in direct tourism expenditures in Rome last year. Ann Hortman, director of the Rome Sports Commission told member of the Tourism Board the 34% figure was a “decent decrease.”

Clarke Schwabe reports that the University of Georgia’s campaign to create the John H. “Johnny” Isakson Chair for Parkinson’s Research and Georgia Research Alliance (GRA) Eminent Scholar position reached its goal of $4.5 million in private commitments, and the final contributor was the former U.S. Senator for whom the chair is named.

Gordon Jackson reports that the Federal Aviation Administration’s decision whether to grant a launch site operator’s license for a proposed spaceport in Camden County is due in the coming weeks. While it’s uncertain how the FAA will rule, it is certain the decision will determine if the debate has ended or if a prolonged legal battle is just getting started.

Jeff Gill reports that a bill that would create a chief elections assistance officer, a state employee who would work with local elections offices on training and evaluating voting processes, has passed the Georgia Senate. Senate Bill 89 “represents an important step towards rectifying the distrust and doubt many Georgians currently feel in regards to our elections process,” Sen. Butch Miller, R-Gainesville, said in a press release Wednesday, Feb. 24.

Emil Moffat reports that the Georgia House of Representatives has passed a bill that would prohibit local communities from reducing funding for police by more than 5% in a year. The bill passed 101-69 with scores of Democrats voting against the measure.

Rahul Bali reports that the Georgia State Senate passed legislation that would stop Georgians from changing their clocks twice a year. Senate Bill 100 would move Georgia to standard time year-round. Georgia would then switch to daylight saving time, if and when Congress allows states to do so.

Nyamekye Daniel reports that the Georgia Legislature has approved a bill that could save taxpayers more than $250 million and would make certain federal Paycheck Protection Program (PPP) loans tax exempt. The measure, House Bill 265, makes an annual update to the state’s revenue code to extend tax deductions for medical expenses, charitable contributions and business meals.

Tia Mitchell reports that the Republican Party’s anti-China strategy has landed on a new target: former President Jimmy Carter’s Atlanta-based nonprofit organization. The Carter Center, founded by the former president and his wife, Rosalynn, in conjunction with Emory University, is a nonpartisan human rights organization that is focused in part on normalizing the relationship between the United States and China.