Molly Samuel and Rob Diaz de Villegas report that on Monday, attorneys for Florida and Georgia will appear before the U.S. Supreme Court for the second time in their battle over water in the Apalachicola-Chattahoochee-Flint river basin. The outcome will affect communities and economies in both states. 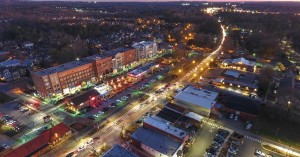 Mary Ann DeMuth reports that the Georgia Department of Community Affairs’ (DCA’s) PlanFirst program recently recognized nine cities and one county for comprehensive planning that is helping to create more vibrant communities. The program is a partnership among DCA, Association County Commissioners of Georgia (ACCG), the Georgia Municipal Association, the Georgia Planning Association and 12 regional commissions.

Andy Peters reports that Airbnb is expanding to Atlanta, the latest West Coast tech titan to move here amid a diversity hiring push. The online platform for vacation home rentals will open later this year an engineering hub, where it will hire hundreds of workers over time, in both technical and non-technical roles, it said Thursday.

Georgia Exports Fall by 6 Percent in 2020

Trevor Williams reports that Georgia’s exports declined by 6 percent to $38.8 billion in 2020, though the state outperformed the the U.S. average in a topsy-turvy year for global trade. The decline followed years of steady Georgia export growth, capped by a record year in 2019 that came on a modest increase.

Tom Corwin reports that the COVID-19 pandemic brought into sharp focus the digital divide in Georgia between those who have good internet access and the more than 500,000 homes and businesses that do not, leaders and advocates said. But getting that service to sparsely populated and rural areas is still a problem and one the Georgia Cyber Center in Augusta is eager to dive into.

Tourism has $83 million-plus impact on Thomasville in ‘19

Staff reports that the U.S. Travel Association recently released its 2019 Travel Economic Impact Report on the State of Georgia and its counties and regions. According to the study made available through the Georgia Department of Economic Development’s tourism division Explore Georgia, the tourism industry in Thomas County generated $83.62 million in direct, domestic traveler expenditures in 2019.

Beau Evans reports that Georgia officials have launched a new website to pre-register for COVID-19 vaccine appointments and are poised to open four mass vaccination sites in different parts of the state, Gov. Brian Kemp announced Thursday. The governor’s update came as more than 1.6 million vaccines have been given to eligible Georgians so far, including roughly 500,000 second doses, according to state Department of Public Health data.

Stephen Fowler reports that Republicans in the Georgia House have released an omnibus elections bill that proposes tougher restrictions on both absentee and in-person early voting, among other sweeping changes to election laws after a controversial 2020 election. HB 531, filed by Rep. Barry Fleming (R-Harlem) was introduced directly into the Special Committee on Election Integrity on Thursday, and the text of the bill was made available about an hour before the 3 p.m. hearing.

Riley Bunch reports that a Senate panel gave full support to a bill that would require counties to begin opening — but not tabulating — absentee ballots ahead of Election Day. Senate Bill 40, sponsored by Atlanta Democrat Sen. Jen Jordan, passed out of the Senate Ethics committee Thursday morning after a bipartisan vote.

Nyamekye Daniel reports that a measure that would increase foster care adoption tax credits could result in a state revenue loss of $4.8 million over the next five years, according to fiscal researchers. House Bill 114, introduced by Rep. Bert Reeves, R-Marietta, would increase the annual tax incentive for adopting a foster child from $2,000 to $6,000.

Robbie Sequeira reports, former three-term congressman Doug Collins is still generating plenty of political chatter, despite no longer holding public office. Even as he enters what he calls a “transition period” from the political arena, he knows that people are watching for his next move.

Jim Denery reports that Gov. Brian Kemp this past week presented his plan to overhaul Georgia’s Civil War-era citizen’s arrest statute, which he called “an antiquated law that is ripe for abuse.” Kemp’s proposal, House Bill 479, follows up on last year’s push, after 20 years of effort, to pass hate-crimes legislation.