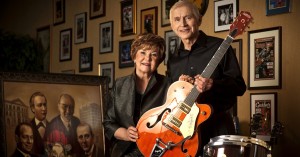 Mary Ann DeMuth reports that Georgia Southern University, with campuses in Statesboro, Savannah and Hinesville, has established the Fred and Dinah Gretsch School of Music after receiving a $3-million donation from the couple who head the Pooler-based Gretsch Co., which manufactures musical instruments. Along with the funding, the couple donated their Gretsch Collection of historic drums, guitars and company archives to the university.

Trevor Williams reports that the Georgia city of Griffin, about 50 miles south of Atlanta, didn’t set out to attract Japanese firms, but it is certainly targeting them now. Some 15 years ago, the city looked to set a new trend in development by creating a “green” industrial park.

David Pendered reports that Atlanta city officials are considering a proposal to more than double the rate of impact fees assessed on new homes and commercial buildings. Developers served on a review panel that endorsed the proposed higher fees.

Gordon Jackson reports, when Hurricane Irma battered the St. Marys waterfront in 2017, sinking dozens of boats and destroying the dock for the ferry to Cumberland Island National Seashore. With nowhere else to go, the National Park Service reached an agreement with the city of St. Marys to use the dock on the gateway property two blocks away for passengers to board the ferry to the island.

Andy Miller reports that tens of thousands of uninsured Georgia children could gain a pathway to health coverage under a House bill moving through the General Assembly. The legislation, if approved, would lead to the state creating “express lane eligibility’’ for many kids receiving food stamps to be automatically added to the Medicaid program.

Jill Nolin and Ross Williams report, frustrated by a groundswell of complaints back home, state lawmakers from both parties have lined up behind an effort to place a new governor-appointed staffer in the state Department of Labor who would share authority with the state’s elected GOP labor commissioner. The agency was overwhelmed early in the pandemic when a historic number of people suddenly out of work filed for unemployment.

Nyamekye Daniel reports that the Georgia General Assembly approved a more than $650 million increase in spending for fiscal year 2021 on Thursday after lawmakers in the Senate and House came to agreement on an amended budget. Lawmakers approved a plan that restores 60% of K-12 school funding and adds spending for public health, state employee raises, broadband internet expansion, higher education and state vehicles.

Patricia Murphy reports, it’s Black history month, but this column is about the Black future. Because if anything illustrates the difference between the past and the future for Black America — and especially Black farmers — it’s the stories of U.S. Rep. David Scott, U.S. Rep. Sanford Bishop, and U.S. Sen. Raphael Warnock.