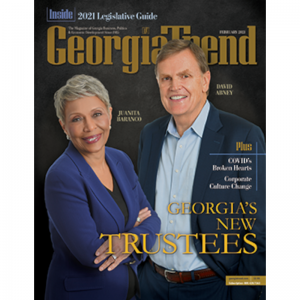 Mary Ann DeMuth and Susan Percy report that one of the reasons Georgia is a great place to do business is the caliber of its business leaders. Not only are they successful in their careers, they tend to be focused on improving the quality of life for individuals throughout the state.

Kelly Yamanouchi reports that Wilfred Arceneaux was a cocktail server at Mustard Seed BBQ in the world’s busiest airport until the bustle of hundreds of thousands of passengers slowed to a trickle in March. That’s when he lost his job. And while he has some health insurance through temporary work for his union this month, he’s worried about what he’ll do after that.

OldCastle Facility to Create Up to 50 Jobs in Floyd County

Trevor Williams reports that Irish building materials giant Oldcastle APG’s lawn and garden division is putting a new facility in Rome, an investment that will employ up to 50 people after it begins production in the spring of 2022. Located on 40 newly purchased acres, the company will build a small facility for mulch bagging, though most dyeing and preparation work will be done outdoors.

Staff reports that one of four new Amazon delivery stations in Georgia will be located in Bartow County. The new stations will power Amazon’s last-mile delivery capabilities to speed up deliveries for customers in the metro-Atlanta area.

Susan McCord reports that a new $2.5 million training site downtown is key to the area plumbers and steamfitters union increasing its presence in area HVAC and plumbing work. “What we’re looking to do is capture some of the HVAC and plumbing market share,” said Bill Wright, the business manager for the CSRA Plumbers and Steamfitters Union Local 150.

Staff reports that the Georgia House’s amended budget will include funding for a behavioral health crisis center for individuals with intellectual and developmental disabilities,” Rep. Katie Dempsey said. The Rome Republican chairs the human resources subcomittee of the House Appropriations Committee.

Chamian Cruz reports, she’s only 12, but Alexandra “Alex” Simpkins has a firm plan for what she’d like to do with her life. And she’s got the business to show it. Her efforts recently paid off when her business, SkyCorp Network, landed a contract with the Center for Children and Young Adults little league football to be the league’s exclusive video/film person.

Max Blau reports that a fight over the future of Georgia Power’s coal ash ponds has returned to the Gold Dome. And its outcome could influence whether thousands of Georgians will need to worry about groundwater contamination potentially caused by the toxic waste sites.

David Pendered reports that the Census data used to draw new districts for Georgia’s congressional and legislative posts will not be delivered before July 30. No delivery date is in public view, and President Biden’s nominee for Commerce secretary said she will not rush the results, if confirmed.

Beau Evans reports that Medicaid enrollment in Georgia has hiked up during the COVID-19 pandemic, prompting some analysts to call for fully expanding coverage for the program that helps low-income families. Others, however, back the partial Medicaid expansion Gov. Brian Kemp steered through the General Assembly two years ago that won federal approval last year.