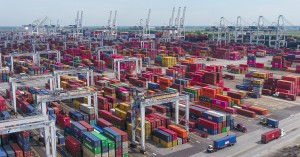 The importance of Georgia’s logistics industry

Mary Ann DeMuth reports that the Metro Atlanta Chamber (MAC) recently released its annual report, Georgia Leading the Way: The Logistics Workforce for the Future. The report highlighted the importance of the logistics and supply chain industry to the state’s future growth, especially in the face of a pandemic that has caused an explosion of e-commerce.

Christopher Quinn reports that PPRO, a London-based financial technology services company with its U.S. headquarters in Atlanta, announced this week it has raised $180 million to fuel global growth. PPRO is a global provider of local payments infrastructure.

Trevor Williams reports that a 5G collaboration between Atlanta-based Envistacom and its Israeli partner is one of eight projects set to receive a combined $7.45 million in funding from the BIRD Foundation. Envistacom and Kfar Saba, Israel-based Ayecka Communication Systems are working together on a “satellite and communication and virtual modem edge device” that will enable technologists to send digitized proprietary waveforms across wireless networks.

David Pendered reports, the next definitive update on Plant Vogtle’s cost and opening date is due in February. Until then, ratepayers are sifting through testimony from a monitor whose report conflicts with statements from the company. This morass has existed for years, as construction of the nation’s only nuclear reactors now underway has continued through economic downturns, a pandemic and – now – its third presidential administration.

Ross Williams reports that the Georgia Department of Public Health is working to get COVID-19 vaccines in the arms of eligible Georgians, but employees there do not get a break from the work they had before the pandemic. That’s what Democratic state Sen. Michelle Au, a physician from Johns Creek, found out as she was helping vaccinate people in Norcross for the health department on a recent weekend.

Christopher Alston reports that a group of Georgia House Democrats has announced a constitutional amendment that would restore voting rights for Georgians convicted of a felony. The bill was sponsored by Rep. Josh McLaurin, D-Sandy Springs, who made the announcement at a press conference Wednesday in front of a mural depicting John Lewis, the late congressman and civil rights leader.

Dave Williams reports that the Georgia House of Representatives got some new committee chairmen Wednesday, as the chamber’s Committee on Assignments promoted some committee chairs to more prestigious chairmanships left vacant by departing members. The Ways and Means Committee, which handles all tax legislation, will now be headed by Rep. Shaw Blackmon, R-Bonaire. He will take over from former Rep. Brett Harrell, R-Snellville, who lost his bid for re-election last fall.

Maya T. Prabhu reports that Georgia’s corrections agencies say a 10% pay hike that Gov. Brian Kemp has proposed for guards could go a long way toward cutting down on turnover. Commissioners of the Department of Juvenile Justice and Department of Corrections said they have struggled to retain officers and often cite the low pay as one reason many leave.