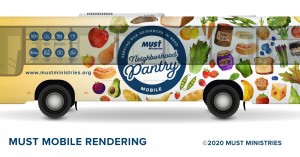 Bringing food and healthcare to Georgians

Mary Ann DeMuth reports, as the COVID-19 pandemic continues, more Georgians than ever find themselves in need of food and healthcare services. MUST Ministries, a Marietta nonprofit dedicated to helping homeless and struggling individuals and families, has provided more than 1.7 million pounds of food to those in need since the pandemic began.

Michael E. Kanell reports that new jobless claims jumped 65% in Georgia in the past week as the pandemic’s slow recovery stretched into 2021. More than 31,000 people filed initial jobless claims for the week ending Jan. 2, joining roughly half-million people already out of work.

Katie Nussbaum reports, continuing the company’s commitment to the community, Parker’s has announced the formation of the The Parker’s Community Fund, which will be administered through the Savannah Community Foundation. The fund is made possible by a $20 million donation from the Savannah-based convenience store company.

Trevor Williams reports that SalesLoft may be born and bred in Atlanta, but the nine-year-old sales engagement software provider that just became the city’s newest unicorn is looking beyond U.S. borders to bolster its already impressive growth. SalesLoft announced Thursday it had raised a $100 million Series E round led by Owl Rock Capital, bringing its total private funding raised to nearly a quarter-billion dollars and valuing it at $1.1 billion.

Larry Hobbs reports that oily sediment leaked into the East River this week through a crack in the pollution protection barrier on the barge 455-8, which holds the severed stern of the shipwrecked Golden Ray at the Mayor’s Point docks in Brunswick, according to Unified Command. Someone reported a possible oil leak on the river Wednesday night, using the National Response Center hotline that Unified Command disseminates for just such instances, said Coast Guardsman Michael Himes, spokesman for Unified Command.

Susan McCord reports that Augusta could get a lot of discussion in the Georgia General Assembly when it convenes, with a bill splitting the judicial circuit reported to be imminent and a discussion of changing the Consolidation Act – and commissioner pay raises – on the horizon. Also forthcoming is redistricting Augusta Commission and school board, state House and Senate and congressional seats based on the 2020 census, officials said at a joint meeting Thursday of the commission and members of the Augusta legislative delegation.

Wayne Ford reports that Watkinsville Mayor Bob Smith recently sent a letter to three area members of the General Assembly proposing that Oconee County break away from the Western Judicial Circuit to form its own circuit, which he labeled the “Oconee North Circuit.” The Western Circuit comprises Oconee and Athens-Clarke counties.

Stanley Dunlap reports that the COVID-19 pandemic means changes to some of the signature annual events that typically mark the start of a new legislative session as lawmakers return to the state Capitol this week. Often the governor and other top state leaders kick off their legislative agenda at the Georgia Chamber of Commerce’s breakfast at the Georgia World Congress Center.

Nyamekye Daniel reports that a Georgia lawmaker is pushing for more transparency in tax-incentive proposals for developers ahead of the upcoming legislative session. Rep. Mary Margaret Oliver, D-Decatur, has pre-filed a legislative package that would allow local governments and school systems to be involved in the development of annexation and tax-abatement plans.

Lawmakers to use first session to prepare for reapportionment, redistricting later this year

Jeff Gill reports that the decennial ritual of redrawing district lines for future elections may not be the only issue on lawmakers’ plates during a special legislative session later this year, as it’s possible the legislature’s regular session may be cut short. The regular session, beginning Monday, Jan. 11, could be shortened out of concerns over COVID-19, which could mean other items that didn’t make the cut could be added to the list in the later session, in addition to redistricting and reapportionment, said state Sen. Butch Miller, R-Gainesville, president pro tempore of the Georgia Senate.

Dave Williams reports that legislative leaders are promising to tackle two issues that dominated the news in Georgia and across the nation when the 2021 General Assembly session kicks off on Monday. Weeks of protests and legal challenges sparked by President-elect Joe Biden’s razor-thin victory over President Donald Trump in Georgia and other battleground states have prompted a call for changes to voting laws in Georgia, including restrictions on mail-in voting.

Carter: Objection to Biden certification was about state process, not Trump

Margaret Coker reports that U.S. Rep. Buddy Carter tried to distance himself Thursday from what he described as an attack by a “few” on the U.S. Capitol and insisted that the violence was divorced from his own objections to the 2020 election, despite both being based on spurious allegations of widespread fraud.

Greg Bluestein reports that Georgia lawmakers return to the Capitol on Monday with Democrats on a stunning winning streak, years in the making, that helped oust President Donald Trump from the White House and capped with a sweep of last week’s runoffs that flipped control of the U.S. Senate.