Staff reports that the National Weather Service has confirmed three tornadoes tore through Georgia on New Year’s Day. Survey crews took a look at two locations in Monroe County and one in Crawford County that indicated a possible tornado on radar during Friday’s storm and confirmed all three had short-lived tornados touchdown. 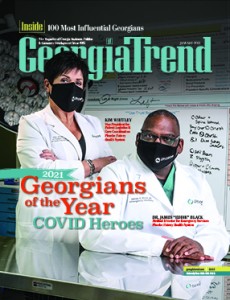 2021 Georgians of the Year: COVID Heroes

Susan Percy reports, this year, Georgia Trend honors those working to combat and mitigate the COVID-19 crisis that upended the state so dramatically last spring. Bestowing our Georgian of the Year award on a group rather than an individual is a first for us, but we are proud to pay tribute to all those who have confronted the health, economic and social challenges of the pandemic, often at considerable personal cost.

Staff reports that leadership Southeast Georgia (LSEGA), a professional development program, named the five-member team of community leaders who will serve as site coordinators for 2021. Established in 1999, LSEGA works to educate and empower community leaders to effectively promote positive growth while improving the quality of life in the coastal Georgia region.

Doug Walker reports that one of the largest business deals in the history of Rome and Floyd County, the marriage of Atrium Health to Floyd Medical Center, is moving closer to reality as the calendar flips to a new year. “Right now we are looking at a submission of our application to the Georgia Attorney General’s office sometime in January,” said FMC President and CEO Kurt Stuenkel.

Larry Hobbs reports that salvage teams completed the second cut into the shipwrecked Golden Ray late Saturday night, separating the vessel’s stern section using anchor chains powered by the towering VB 10,000 crane vessel. The twin-hulled VB 10,000 straddled the half-submerged shipwreck in the St. Simons Sound and employed winches, pulleys and lifting blocks to pull the chain up through the ship’s daunting layers of thick steel by sheer force of tension.

Jenna Eason reports, when Zernial Bogan moved to Middle Georgia in 2014, he expected to relax with his family for his retirement. However, Bogan noticed a similar gap in resources for a particular group of people that he had experienced when he lived in Illinois.

Stan Herd’s portrait of John Lewis: ‘Lending art to causes … that have changed the world’

David Pendered reports that a tribute to John Lewis to be unveiled Monday in Freedom Park is being created by a renowned Earthwork artist who fashioned this image of the civil rights leader soon after he completed works of Joe Biden and Kamala Harris. Stan Herd is creating the image of Lewis near the intersection of Moreland and North avenues.

Sarah Rose reports that Georgia’s independent music venues have been pleading with state and local government officials for additional assistance to help them weather the pandemic. With the passage of the new stimulus bill, relief may finally be on the way. Josh Antennuci, owner of the Center Stage venue in downtown Atlanta, had a grim prognosis for the future when he spoke to GPB News earlier this year during the onset of the pandemic.

Dave Williams reports that legislation the General Assembly passed this year covering a wide range of subjects from health care to law enforcement to Georgia’s foster care system will take effect with the new year.

‘I just want to find 11,780 votes’: In extraordinary hour-long call, Trump pressures Georgia secretary of state to recalculate the vote in his favor

Amy Gardner reports that President Trump urged fellow Republican Brad Raffensperger, the Georgia secretary of state, to “find” enough votes to overturn his defeat in an extraordinary one-hour phone call Saturday that legal scholars described as a flagrant abuse of power and a potential criminal act.

Greg Bluestein reports, it was already destined to be a climactic finish to Georgia’s Senate runoffs with dueling visits Monday from President Donald Trump and President-elect Joe Biden. The bombshell tape featuring Trump pressuring the state’s top elections official to overturn the election adds a stunning twist to the race’s final hours.