Pandemic-plagued Georgia economy on track for recovery next year

Dave Williams reports that the recession prompted by the coronavirus pandemic is likely over in Georgia, but the state remains far short of a full recovery, a University of Georgia economist said Thursday. Georgia is on track for an economic growth rate of 4% next year, outperforming a national growth forecast of 3.5%, Benjamin Ayers, dean of UGA’s Terry College of Business, said during the university’s annual economic forecast. 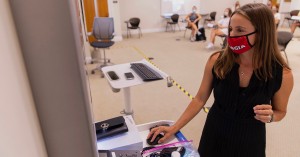 Mary Ann DeMuth reports that Atlanta-based Chick-fil-A Inc. has committed to donating $10 million to the University of Georgia (UGA) Institute for Leadership Advancement (ILA). The company’s pledge is the largest ever dedicated to academic support in the history of UGA’s Terry College of Business, which houses the ILA. It’s also the largest single gift ILA has received.

Kelly Yamanouchi reports that Delta Air Lines says it is equipped to distribute temperature-sensitive COVID-19 vaccines as it pushes to secure part of the business that will come from the massive shipping effort. Atlanta-based Delta has a 40,000-square-foot cold chain facility at Hartsfield-Jackson International Airport, which is certified to handle temperature- and time-sensitive pharmaceuticals.

Becky Purser reports that Atrium Health announced Thursday that an Emory graduate will serve as the next president and CEO of Atrium Health Navicent. Delvecchio S. Finley, CEO for Alameda Health System based in Oakland, California for the past five years, is expected to assume his new role Feb. 1.

Nick Watson reports that a parking deck, a helipad and an expanded emergency department are just pieces of Northeast Georgia Health System’s plan for a new tower at Northeast Georgia Medical Center in Gainesville. The health system announced plans Thursday, Dec. 3, for a new multi-story tower, which would go next to the existing north patient tower as early as 2024.

Ariana Figueroa reports that the U.S. House Democratic caucus on Thursday ratified Rep. David Scott’s selection to chair the Agriculture Committee, making him the first African American and the first Georgian to lead the panel. “I was born on my grandparents’ farm in rural Aynor, South Carolina, during the days of segregation, and the hardships, of those, on whose shoulders I now stand,” said Scott, who represents who represents a southwest suburban Atlanta district.

Bryce Ethridge reports, when President Donald Trump visits Valdosta Saturday evening, Mary Blocker will be there. She is excited Trump is coming to town.  Not everyone agrees. The Lowndes County Republican Party member said she is excited about the presidential visit in part because she believes it will benefit GOP Senate candidates.

Christopher Alston reports that former New York City Mayor Rudy Giuliani was in Georgia on Thursday to make claims of widespread voter fraud at one of two Senate committee hearings held on election security. Giuliani and his team presented experts and witnesses who testified about vulnerabilities in the voting system and cases where someone reported having seen voting impropriety, much of the testimony based on debunked conspiracy theories or unverifiable hearsay.

Pence to visit CDC in Atlanta, rally for runoff candidates in Savannah

Greg Bluestein reports that Vice President Mike Pence is returning to Georgia on Friday for the second time in two weeks to stump for Republican runoff candidates, part of the all-out GOP push to convince rank-and-file voters to return to the polls ahead of the Jan. 5 vote to decide control of the U.S. Senate.